A modern, elegant stallion from a top-class pedigree 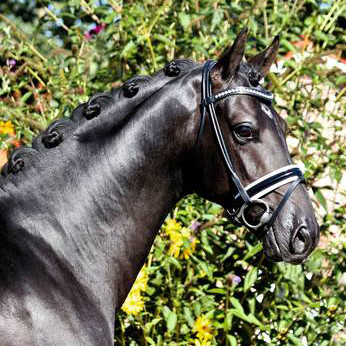 
Terms: €300 + VAT per insemination allowing the registration of one foal. If the mare is certified not in foal there is no refund or credit due.

About - Le Vivaldi is an ultra-modern, big-moving young stallion with very good mechanics and three excellent gaits. His pedigree combines the most successful sires from Dutch and German breeding in recent years, with all seven stallions in the first three generations having proved themselves in sport and breeding. Le Vivaldi was a premium stallion at his licensing, and passed his performance test with very high scores for rideability.

Sire - His sire Vivaldi was internationally successful with Hans Peter Minderhoud, and has 19 licensed sons in Germany. Vivaldi was himself Reserve Champion of his stallion performance test with 9.0 for walk and canter as well as 8.5 for trot, and won the five-year-old Pavo-Cup in Holland, won three stallion competitions in 2008, and in 2009 won the final of the KWPN stallion series, receiving a 10 for his trot. Both Vivaldi's sire Jazz and damsire Krack C competed at grand prix. Almost 100 Jazz offspring have reached grand prix, and he is currently ranked fifth on the WBFSH Sire Rankings, having led the rankings for four years (2008-2011) and having never been out of the top five since the current rankings began; a more successful record than any other stallion.

Damline - Damsire Sandro Hit has become a legend in his own lifetime. He was Bundeschampion and World Champion as a six-year-old in 1999, dominating both competitions from start to finish. Ten of Sandro Hit's progeny have followed in his footsteps by winning the Bundeschampionat. His offspring are competing in advanced level dressage and Salieri OLD has won several international Grand Prix with his rider, Victoria Max-Theurer. The Rio 2016 were a showcase for Sandro Hit; his son Showtime FRH was part of the German gold medal-winning team, and sixth individually, while Santano II was team bronze medallist in eventing for Australia, finishing fifth individually having led overnight. His son Sir Donnerhall has become a prolific producer in his own right, and was the sire of double World Young Horse Champion, Sa Coeur, while his full brother, Sir Donnerhall II OLD, competes at grand prix under Morgan Barbançon-Mestre.

Le Vivaldi's grand-dam Dynastie is the full sister of the successful stallion Scolari, and their full sister Daylight produced Flanell (by Fidertanz). Their dam Wicke produced two licensed sons and six state premium daughters, and is the full sister of the licensed Worldman, and their full sister produced the stallions Dramatic and the hugely successful Furst Rousseau. Other stallions from this mareline include Aleman, Quattroporte, Belfort G, Rhodes Scholar, Regazotti, Balance of Power 2, Barclay I & II, Sir Stanislaus 3, and St Petersburg.