Like Pleasure is an exciting stallion with a top pedigree, he has the appearance and talent of his sire For Pleasure. 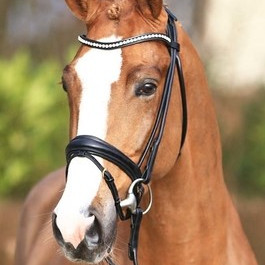 
Terms-  €1000 +VAT, allowing unlimited attempts with chilled semen, for one named mare in one breeding season. If the mare is certified not in foal before the end of September, then a 100% credit applies the following year to spend on any stallion from the same stud.

About - Like Pleasure is the offspring of one of the most famous sires in the show jumping world and takes after his good looks as well as talent. He has been descriped as having incredible scope and a good understanding of his job, demonstrating an impressive technique and rideability.

Performace - Like Pleasure has successfully completed his stallion performance test in 2019 and is registered in the "stallion book I" and approved for breeding without restrictions. In 2020 he made his show debut and came runner-up, but in 2021 Like Pleasure won a youngster class on A**-level and placed several.

Sire - For Pleasure is a sire who demonstrates suppleness, scope and rideability which is known for passing on to his offspring. He had an extremely successful career having retired at 20 he continued to win up untill his last ever show. He competed internationally and was on 4 gold medal-winning teams for Germany; two Olympic Games (Atlanta 1996 & Sydney 2000, where they finsihed 4th individually), and two European Championships, at Hickstead in 1999 where he was 5th individually, and Donaueschingen in 2003. At Donauschingen, he also won individual bronze, the first ever individual medal for Marcus Ehning. He also won gold and silver medals at he German National Championships. His career earnings totalled over €1.8million, ahead of Milton, and his offspring have won over €2.5million between them.

Damline - Toulon was a star in his sport, competing internationally and was awarded horse of the year in 2007, he achieved 9th place in the Gold League, 5th place Grand Prix in Brussels, 1st place performance stallions in France. With his proven bloodlines he has passed on his promising breeding potential.

Progeny -  Like Pleasure's first crop of foals were awarded the Oldenburg Main Premium.  The Breeding Director, Bernhard Thoben, was enthusiastic about the great first crop of Like Pleasure, he described them as: "Large-sized foals that move in a very sporty-modern way. The good impression Like Pleasure makes under saddle is confirmed by his offspring."