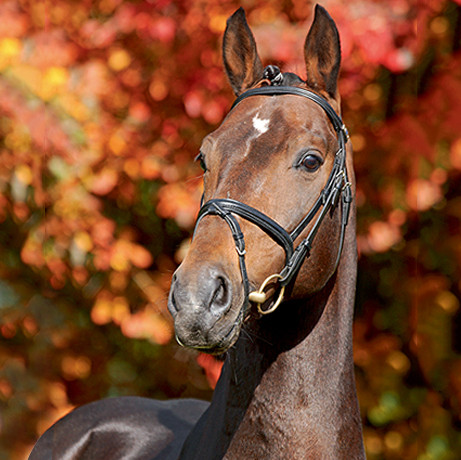 About - Lord Pezi was a foundation stallion for Böckmann, and was stationed in Hamstrup for many years. He has a great deal of power and scope, with an excellent technique, and passes this onto his offspring.

Performance - Lord Pezi was reserve champion of his licensing and winner of the jumping section. In the year 2000, he won several young horse classes, and qualified for both the Bundeschampionat and the World Young Horse Championships. He later jumped internationally at advanced level with many successes.

Sire - His sire Lacros was a prolific winner during the 1990's on the international show jumping scene under Dirk Schröder, winning nearly €250,000 during his career. Lacros sired five licensed sons, and also sired two phenomenally successful CCI4* event horses in Quimbo, winner of Kentuck 2013, and Qwanza, fifth at Luhmühlen and seventh at Kentucky, both piloted by Kiwi ace Andrew Nicholson.

Damline - Lord Pezi's dam Miss Playback is also the dam of another licensed stallion in Liberty Life, plus the grand prix mare Free Lilly, who is a state premium mare and the dam of the two stallions Christian 25 and Lukanec.

Progeny - More than 20 of Lord Pezi's offspring have reached grand prix level, including Lord Spezi, who jumped at the 2008 Olympic Games, Lombadia and Lariccello. In 2013, his sons Little Pezi and Niagara were both placed in the 3* at Drachten. His son Lord Pezi Junior, one of more than 20 licensed sons, now stands at the Hamstrup stable too, following in the footsteps of his great sire.