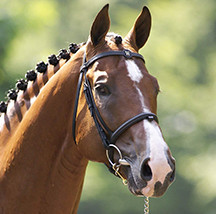 
Terms - €1500+VAT for unlimited attempts with frozen semen, for one named mare in one breeding season. If the mare is certified not in foal by the end of September, €1200+VAT will be refunded.

About -  Lupicor is a fantastic stallion in the top of the German breeding indexes and belongs to the best stallions in Europe. He is sire to the 2006 KWPN stallion champion L’Esprit (Lupicor x Landgraf I) who has strongly developed himself in a very positive way in his breeding career.

Sire - Lux Z started his career in Holstein before moving to The Netherlands. Later he commenced a successful international career with Italian showjumping rider, Jerry Smit, and the pair competed at the 2000 Olympic Games in Sydney. They also won the Pulsar Crown competitions at Valkenswaard and Cannes, and participated in the WEG in Jerez in 2004. Lux won over a million euros in prize money throughout his career.

Damline -  Lupicor is bred out of the ‘keur’ awarded Jourdette S, a daughter of the Westphalian show jumping horse progenitor Pilot. Jourdette S made a worthy career for herself in show jumping, competing at national and international levels. The mare has an excellent technique and is very careful. The KWPN has approved the stallion Pitcher S, who jumps the national competitions and is a full brother to Jourdette S. The same dam line also produced the international show jumper El Padrino (s. Jasper) and belongs to one of the best breeding lines in The Netherlands.

Progeny - His offspring are proving his worth as a sire as a large number are competing well, for example California who, with Edwina Alexander,  is very successful in 1.60m GP competitions. Other successful international showjumpers by Lupicor are: Correte (Keean White), Brianda (Ali Wolff), Zandigo TS (Philipp Schober), Cisco’s Zidane (Andres Penaloza), Zamiro (Kara Chard) and Waomi (Kent Farrington).