The full brother to the champion stallion Vitalis, and is following in his footsteps. 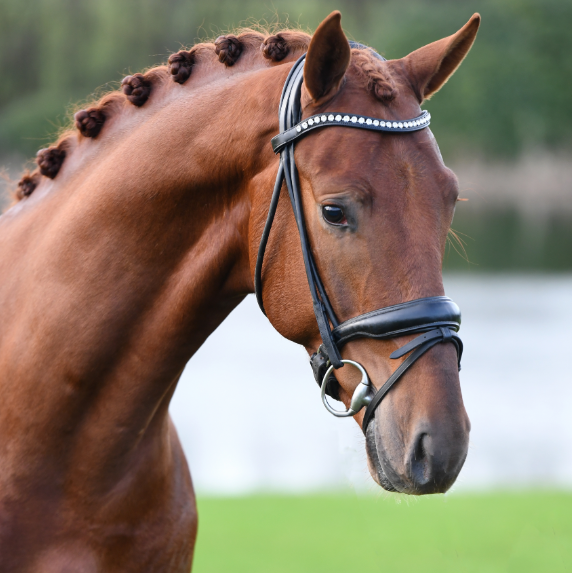 
Terms: €1000+VAT for unlimited attempts with frozen semen for one named mare in one breeding season. If the mare is certified not in foal before the end of September then you get a 50% credit the following year to use on any stallion from the same stud. If the first AI of the year was 1st July or later, then the credit in the event of non-pregnancy is 100%.

Please note: This stud prioritise mares on site in Germany for chilled semen from their stallions, so popular stallions may be unavailable in the peak of the season with no notice. In this instance, frozen can be offered on the same terms for most stallions, but we advise that you also have a second-choice stallion in mind also standing at Schockemöhle, in case your first-choice stallion cannot be supplied.

About & Performance -  With My Vitality, the younger full brother of the proven stallion Vitalis joins our stallion collection. With his good looks, he is a real eye-catcher. And as for his paces, he is in a class of his own. He will certainly follow in his brother Vitalis' footsteps, who has made headlines from the World Dressage Championships for young horses to his victory in the Burg Cup.

In 2020 My Vitality won his 35-day performance test with the impressive score of 902.5 points.

Sire - His sire Vivaldi was Reserve Champion of his stallion performance test in the Netherlands. In 2007, he won the Pavo Cup for five-year-old dressage horses and in 2008 and 2009, ridden by Hans Peter Minderhoud/NED, he won the KNHS/KWPN stallion competition, where he was awarded 10.0 for his trot. He was then internationally successful up to Prix St. Georges. In 2013, he won the VHO trophy at the KWPN licensing. After that, he was predominantly used for breeding and he is now recognised globally as an outstanding producer of sport horses and stallions. He has more than 30 licensed sons, among them several highly-priced premium stallions. In the Netherlands, his progeny are already counted amongst the top dressage horses.

Damline - His dam Tolivia was the three-year-old Champion Mare in the Netherlands. Damsire D-Day was champion dressage stallion of his performance test and acted as a schoolmaster at advanced level for many years after being gelded. His influence is strongly felt in Swedish dressage breeding. Third sire Argus competed up to 1.50m level showjumping and also at grand prix dressage, while Aktion J, who follows in the fourth generation, counts as one of the most successful dressage horses of his generation under Hungarian Gyula Dallos. The licensed stallion Qarco van het Graethemhof, bred in Belgium, comes from this dam line.