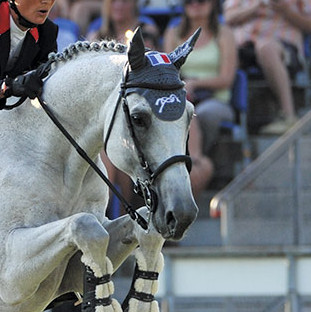 
Terms: €2850+VAT for three attempts with frozen semen, on one named mare in one breeding season. If the mare is certified not in foal by the 30th September, then €2500 +VAT will be refunded.

About - Mylord Carthago has been an internationally successful grand prix superstar under Penelope Leprovost, who described him as "the horse of a lifetime, the horse of my heart." This big grey stallion is intelligent, with good movement and lots of blood; he is suited to mares with a compact top line, lacking scope or style as he will in particular improve their canter and willingness to jump.

Performance - He was a finalist at the Lanaken World Young Horse Championship at as a four-, five-, and six-year-old, and finished 4th as a seven-year-old. Then he embarked on an amazing international competitive career with Penelope Leprevost. He won many prestigious competitions between 2004 and 2012, including a team silver at the 2010 WEG in Kentucky, and a team silver medal at the 2011 European Championships in Madrid, where he finished 7th individually. He was a finalist at the 2004 World Cup in Geneva and competed at the 2012 London Olympic Games. He won numerous CSI5* Grand Prix including Helsinki, Vienna, and Paris, was second at 2012 Gijon CSIO5*, 2011 La Baule, 2012 Chantilly, 2012 Rotterdam, third in the 2009 London Olympia World Cup Qualifier, and the 2010 Rome CSIO5*. He was also part of winning Nations Cup teams at Aachen and Gijon in 2012. He won the Vienna GCT Grand Prix, the Gucci Paris Masters, and the Prix RMC at La Baule.

Sire - Carthago Z jumped in the Atlanta (1996) and Sydney (2000) Olympics, won the Nations Cup in Aachen, Rotterdam and La Baule as well as numerous grands prix under Jos Lansink. He has sired more than 160 grand prix jumpers, and has more than 100 licensed sons, including Old Chap Tame, Cartani, Carthino Z, Coltaire Z, Looping D’Elle, and Nartago. He combines the two great 'C' lines of Capitol I and Calando I, a son of the great Cor de la Bryère.

Damline - His dam line is one of the best the Selle Français has to offer and comes from a long line of international showjumpers, with Jalisco B as his damsire. His dam Fragrance de Chalus competed as an international showjumper, first with David Jobertie, and then with Karline de Brabander. Fragance produced three exceptional stallions, Mylord Carthago, Norton d’Eole and Bamako de Muze (by Carthago, Cento and Darco, respectively). Jalisco B is a son of the foundation sire Alme Z, and both stallions competed at grand prix themselves, and have more than 50 grand prix offspring between them, including Papillon Rouge and Quidam de Revel (Jalisco B), and Animo, I Love You, Galoubet A, and Elvira (Alme Z). Galoubet A is the grand-sire of Big Star via his son Quick Star and is also the sire of the unparalleled Baloubet du Rouet.

Progeny - Mylord Carthago has already sired at least three grand prix jumpers, among them Twentytwo Des Biches, who was more recently fourth in the highly-competitive grand prix of Al Ain as just a 10-year-old. He has 18 licensed sons including Valmy de la Lande, who was jumping international 1.50m classes as a seven-year-old. While Mylord is easy to breed and fits a wide range of mares, he pairs very well with medium sized, compact mares. He is an excellent choice for mares that need improvement in scope and canter. He consistently passes on his jumping technique, mild temperament, carefulness and good conformation.