An outstanding young stallion and brother of the great Emerald 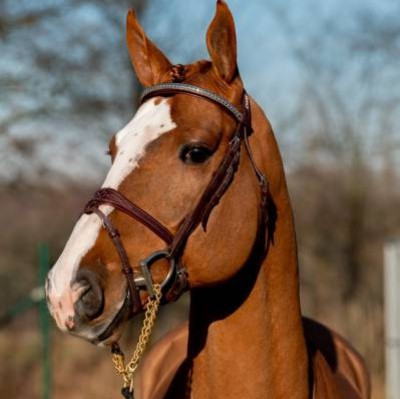 About - Nixon van 't Meulenhof is one of the most promising and exciting young stallions of his age, and is being brought on gently jumping the young indoor stallion competitions in Belgium before Harrie Smolders takes the ride. His power, presence, technique and intelligence make him an exciting prospect for the future. He is descended from a superb pedigree on both sides, packed full of grand prix horses.

Sire - Denzel van't Meulenhof is a son of the grand prix stallion Marius Claudius, who jumped for Great Britain under Robert Smith and also produced several international horses before his untimely death. Denzel’s dam is the famous grand-prix jumping mare Narcotique de Muze IV, by Quidam de Revel, who is descended from one of the best damlines in the Netherlands, a direct daughter of the great Qerly Chin. Narcotique is also the dam of the approved stallions Iron Man, who jumped at 1.40m, and the 1.60m grand prix stallion Jenson, in addition to five other horse jumping at 1.45m plus. Narcotique's sisters between them are the dams of nine licensed stallions and five 1.60m grand prix horses, among them Querlybet Hero, Loro Piana and Ducati van Schuttershoff. Their dam Qerly Chin produced five grand prix jumpers herself including Walnut de Muze, dam of I'm Special de Muze, Werly Chin and Walloon de Muze.

Damline - Nixon’s dam Carthina Z is the dam of the enormously popular stallion Emerald van het Ruytershof, and his full-sister Diamanthina van het Ruytershof, who both jump at international 1.60m level. In 2016 Emerald was second in the World Cup Final in Gothenburg, and was also part of the Dutch Olympic team in Rio, and in 2017 her won the Global Champions Tour in Chantilly. Carthina jumped to 1.45m herself has produced a further grand prix daughter Illusionata, and the 1.45-1.50m jumpers Fragile, Gucci, and L'Innocence. Her sire Carthago is one of the greatest Holstein stallions of the modern era.

Progeny - From his first crop, his daughter Rosie van't Netehof was the price highlight of the 2017 Princes auction.