A grandson of Darco from a proven damline 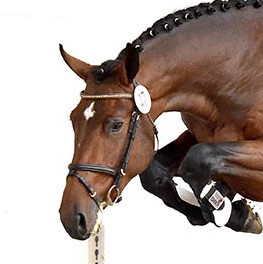 
Terms - €1300 + VAT for unlimited attempts with chilled semen for one named mare in one breeding season. If the mare is certified not in foal by the end of September, a 100% credit applies the following year to be used on any stallion from the same stud.

About - Ogano is an important addition to the Sosath roster, bringing an injection of fresh bloodlines into their breeding programme. He is tall, modern and long-legged stallion with everything a jumping stallion needs; power, scope, and three balanced paces.

Performance - He performed very well at his 30-day performance test, receiving an overall jumping mark of 8.15. At his first show, he was second in a young horse class to stablemate Casino Grande. In early 2017, Ogano won his stallion sport test as the best five-year-old, finishing on a score of 9.2, including a 10.0 for scope and a 9.5 for jumping technique.

Sire - Ogano Sitte, his sire, was a prolific winner as a young horse and is one of the best-known sons of Darco. As a four-year-old, he won the "Classic Cycle" and was a finalist at the Belgian champion. By the time he was seven, he had competed at two more Belgian championships and that year, finished second in the Stallion Grand Prix in Mechelen. As an eight-year-old, he was sixth in the Zangersheide Sires of the World Grand Prix in Lanaken, second in Moorsele and won the CSI4* Grand Prix of Naples, and the CSI2* Grand Prix of Strazeele. He recorded further wins and international placings as a nine-year-old, before his owners decided to retire him to stud, such was the quality of his first few crops of foals. Ogano Sitte's dam Ialta Sitte was internationally successful at grand prix level herself. Her grand-dam Gute Sitte was part of the bronze medal-winning Belgian team at the Olympic Games of Montreal in 1976. The most successful descendants of Ogano Sitte include Aganix du Seignor and Gaudi.

Damline - Damsire Diarado was Holstein Champion Stallion in 2007 and subsequently won his stallion performance test . Sporty, modern,and  with lots of 'pazazz' at the jump, he won many jumping tests with high scores and took bronze in 2010 at the Bundeshampionat for five-year-olds.  Now successful at advanced level, Diarado is currently one of the most sought-after sires and leads the FN breeding value statistics for jumping stallions on 169 points. Ogano's grand dam Harmonie XXXI (by Cantus) is the full sister to the approved 1.40m jumping stallion Cyrano, ridden by Gerd Sosath, and the sport horse Capitano. Ogano's damline has produced the internationally successful Calato's Boy (by Calato), Celentano (by Contender), and Concorde (by Chepeto).

Progeny - In 2017, Ogano became Main Premium winner. He was awarded due to his exceptional first offspring and his great performance. Organo's foals were described as well built, long legged and an harmonious exterior, they also have an active hindleg in the trot. They were also described as beautiful types, easy going and built uphill with a canter that excited the judges.