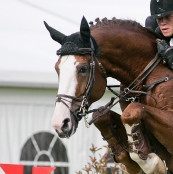 
Terms - €1500+VAT for unlimited attempts with chilled semen for one named mare in one breeding season. If the mare is certified not in foal by the end of September, €1200+VAT will be refunded.

PLEASE NOTE: Ogano Sitte is collected Monday, Wednesday, and Friday for delivery Tuesday, Thursday, and Saturday. The availability of Saturday deliveries will depend on your location and postcode.

About - Ogano Sitte is a world-class stallion from an impeccable damline, with a grand prix performance record and offspring enjoying success at the top of the sport. He is a tall, but compact stallion with power, scope, and presence.

Performance - As a four-year-old, Ogano Sitte won the four-year-old championships and was a finalist at the Belgian Championships, also qualifying as a six- and seven-year-old. In his seven-year-old year, he was second in the Mechelen Grand Prix and 10th in the CSI3* Grand Prix in Liege, and at 8 he was sixth in the Zangersheide 'Sires of the World' Grand Prix and winner of both the CSI4* Grand Prix of Naples and the CSI2* GP in Strazeele. As a 9-year-old, he recorded several top-10 placings at 1.50m level, including 4th in the CSI5* 1.50m at Hickstead.

Progeny - Ogano Sitte is the sire of more than 20 1.60m international grand prix horses including the hugely popular breeding stallion Aganix du Seigneur Z, who was at the peak of his international career when he was forced to retire through injury, having successfully jumped double clears at CSI5* level and top-10 placings at 1.45-1.50m. Sisley de la Tour Vidal has placed internationally at 1.50m, as has Tonik Hero, while Upset des Cinq Chenes won the 1.45m in Arezzo and was 5th in the 1.60m Nations Cup in Celjie. Ogano Sitte's offspring are athletic models with power, rideability, and scope.