A beautiful model of a stallion with excellent jumping qualities. 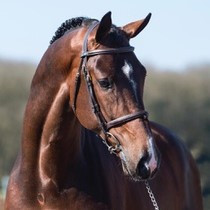 
Terms - €900+VAT for unlimited attempts with chilled semen, for one named mare in one breeding season. If the mare is certified not in foal by the end of September, €650+VAT will be refunded.

PLEASE NOTE - Panenka de Kalvarie is collected on Monday, Wednesday, and Friday each week, for delivery Tuesday, Thursday, and Saturday. These days are subject to change; please confirm prior to ordering.

About & Performance - The BWP-bred Panenka de Kalvarie made a big impression during his approval at Zangersheide with his jumping ability, his commitment, reflexes and very good technique during free jumping. He moves with a lot of body use and his canter has plenty of impulsion and balance. In addition, the well-developed son of Comme Il Faut has a beautiful, long-lined high-legged model with a lot of appearance and quality. What makes Panenka de Kalvarie even more interesting for breeding is its great pedigree.

Sire - Comme Il Faut was second in the World Championship for five-year-olds at Lanaken in 2010. From the beginning, this stallion demonstrated his outstanding qualities on the international stage. At the start of his career he jumped in young horse classes, but after only one season he was jumping at grand prix. In 2013 and 2014, he achieved good results in 7 & 8-year-old classes, then two seconds in 2014 at Paderborn CSI3*, and in the grand prix at Dortmund CSI3*. In 2015 he achieved 3rd in 1.60m CSIO5* at Rotterdam, 3rd in the Rome GCT grand prix, plus placings in three World Cup qualifiers; 4th in Oslo, 6th in Helsinki and 9th in London. 2016 was his best season yet - he won the Vienna GCT and the Madrid World Cup qualifier, plus the grands prix at Paderborn, München and Gross-Viegeln.

Damline - His dam Lady van 't Roosakker competes at 1.40m level in show jumping with the French rider Alexa Ferrer under the name Estrella Hero Z. The mare is now eight years old and produced three foals prior to her sports career. Her sire Echo van Spieveld was successful at 1.60m level, is an elite stallion at the BWP and his mother produced three 1.60m horses. Grand dam, Electra van' t Roosakker jumped at the highest level with Jos Lansink and Janika Sprunger. The daughter of Carthago Z played with the obstacles and showed her enormous scope and superior technique in many Grand Prix shows. In breeding Electra produced nine International show jumpers in addition to Panenka's dam