The exciting up and coming champion stallion! 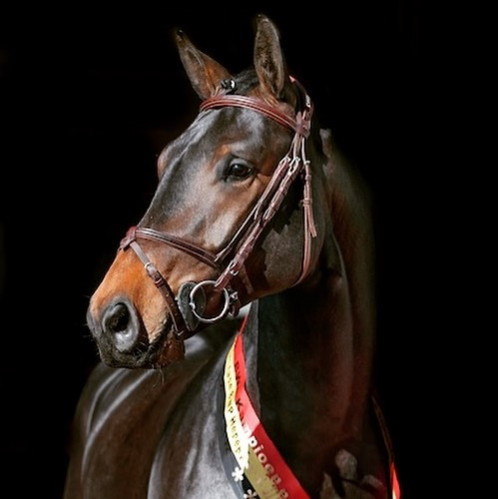 
Terms - €1200 +VAT for up to three attempts with frozen semen on one named mare in one breeding season, if the mare is certified not in foal by the end of September €800 +VAT will be refunded.

Pegase semen is to be sent to approved centres only, for more information please contact the office.

About & Performance - Pegase van't Ruytershof has been in the eye of many spectators and breeders with his impeccable sporting results as well as his breeding potential. Son of the prolific stallion Comme Il Faut, has caught vast interest due to his scope and sheer presence in the ring, under Jeroen De Winter the up and coming stallion has made his mark from the very beginning. Pegase was crowned champion stallion of the 2018 BWP Stallion licensing as a 3 year old, his first crop of foals were a strong collection, at the BWP Elite Foal Championship the Winner was a descendant of Pegase who took the top spot for both colts and fillies.  In 2019 he won the Pavo Stallion Competition in the 4 year old class having jumped clear. He received the BWP Young Stallion Award in 2020 - this special stallion has proved an enormous amount in such a short space of time, no questioning why his popularity is so strong!

Sire -  Comme Il Faut is a son of the world's most successful jumping mare, Ratina Z, who won back-to-back team golds at the Barcelona and Atlanta Olympic Games with two different riders, and also took home individual silver from Barcelona. She won the World Cup in 1993 and the Grand Prix of Aachen in 1996, team gold at the World Championships in Den Haag in 1994 and double gold at the European Championships in Mannheim 1997. His sire Cornet Obolensky competed in the 2008 Olympics at the young age of nine. He is a foundation stallion in the breeding of modern jumping horses, and is currently ranked fourth in the 2017 WBFSH Sire Rankings. The total earnings of his offspring, including former World Number One Cornet D'Amour, Cornado NRW, Cornet's Cristallo, Cocoshynsky, Cornetto King, and Comme Il Faut, are over €3.7 million. The Clinton/Heartbreaker cross is a proven formula that has produced multiple grand prix jumpers including Cordess and Consul DL Vie Z, and 18 further licensed stallions.

Dam-sire Cartani has been the centre of the Danish Nations Cup teams for several years, jumping at Sopot, Drammen, Gijon, Odense, Aachen, St Gallen, and Rome. At the start of his career, he also jumped for a short time under German ace Marcus Ehning, picking up several placings at 1.45m level. Cartani also competed at the 2013 European Championships under Charlotte Von Rönne.