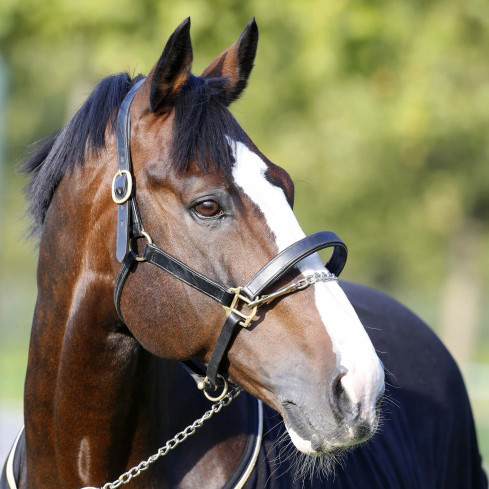 About - Plot Blue has been an international superstar who remained at the very top of the sport for many years, racking up many victories, medals and team appearances. He is a powerhouse of a stallion, with strong hidquarters and abundant scope. He is quick in the air and releases well behind, and he is not only rideable but also manoeuverable; shortening and lengthening easily. In a jump-off, Plot Blue is fast and clever, very good in the contact however sharp the turn, and he will jump from absolutely any stride.

Performance - His international career has been exceptional. He has competed at five senior championships, two World Cup Finals, 23 GCT Grands Prix, and on the GCT Tour alone he has earned over €420,000 in prize money. In 2010, he was the brilliant winner of the Geneva World Cup Final under his long-term partner Marcus Ehning. In the same year, they led the Germans to team gold at the 2010 Kentucky World Equestrian Games, and the previous year had picked up team bronze at the Windsor Europeans on their first championship appearance together. In 2012, they finished fifth individually at the London 2012 Olympic Games, and they were part of several winning Nations Cup teams; twice at Hickstead (2011 & 2013) and at Falsterbo. He won the Vienna and Cannes GCT Grands Prix, the 2013 Saut Hermes GP, the 2008 Lyon Equita Masters, and the St Gallen Longines GP. The were placed in many World Cup qualifers, including second in Gothenburg, third in Zurich, and fourth in Geneva and Leipzig. He was third in the Hickstead King George V Cup in 2014, seventh in the same class the following year, and third in the prestigious Aachen Grand Prix.

Sire - Mr. Blue has sired many hugely successful grand prix horses, including Simon, Sapphire B, and Zirocco Blue. Simon finished in the top 10 of the World Cup Final four times, including winning in Gothenburg in 2013, won the Spruce Meadows GP, and finished sixth individually at the 2011 European Championships under Beezie Madden. Sapphire B won the London Olympic World Cup qualifier and was third in the Gothenburg leg with Maikel van der Vleuten, amongst many other international wins and placings. Zirocco Blue was part of the Dutch gold medal-winning team at the 2015 Aachen European Champioships, where he finished fifth individually.

Damline - Plot Blue's dam Ilotte has also produced the licensed grand prix stallion Oklund, who has been awarded keur status by the KWPN, and her daughters have produced between them the stallions Dakar, Damasco Vitanova, Extase, and Elton John. Ilotte's maternal half-sister produced a further licensed grand prix stallion, Paramo K, and the damline has also given grand prix jumper Pershing, and licensed stallion Laurus K. Damsire Pilot is the sire of many grand prix jumpers and licensed stallions including Peter Pan, Power Light, Primar, Iroko and Pilot Z.

Progeny - Plot Blue's offspring are natural competitors like their sire; he is ideally suited to blood or Holstein mares who need to produce foals with more power and spirit. He has several licensed sons already, and his oldest offspring are seven-year-olds who are emerging successfully, having already been well-placed in young horse classes.