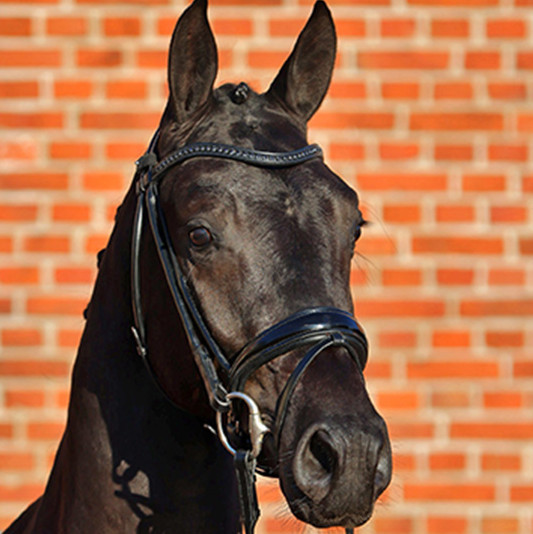 
Terms -  €800 + VAT for unlimited attempts with chilled semen on one named mare during one breeding season. If the mare is certified not in foal by 30th September, a 100% credit applies the following season for any stallion from the same stud.

About & Performance - This youngster from the Netherlands can certainly be called an insider's tip and a real blood alternative. Prime Time is still a very young stallion, but he already reveals his special qualities as a future dressage horse.

Gerd Sosath says: "When I saw this young stallion for the first time, I immediately discovered his potential and talent. He is still very much developing, as he was born late, but I am convinced that he will grow into an outstanding athlete."

Sire - Painted Black had a dream career as a young horse. As a three-year-old, he was Reserve Champion in the VSN Trophy final, four-year-old Annual Champion at the stallion shows in the Netherlands, runner-up in the World Championships for 6-year-old dressage horses in Verden and winner of the stallion competitions in the Netherlands. He was a winner in international Grand Prix and World Cup competitions for many years before he was taken over by Morgan Barbançon Mestre in 2011 and celebrated great success with her in the Spanish national team. Painted Black was not retired from competition until the age of 19. Numerous offspring are successful at Grand Prix and his licensed sons are internationally sought-after sires. The Dutch federation honoured him with the special title "Preferent", the highest title in Dutch riding horse breeding.

Damline - Prime Time's dam's sire Negro is the sire of Olympic, European and World Champion Valegro and produced many successful Grand Prix horses. In 2012, he was also awarded the title "Preferent". Prime Time's dam line, which goes back to Karin by Apollo, is one of the most successful in the Netherlands. Numerous exceptional horses in terms of character, conformation and movement come from this line. Several have been named "Prestatie" mares in both show jumping and dressage, meaning that at least three offspring have been successful in high level sport. Prime Time's dam Fivanny also produced the licensed "Love Just Mickey" by Lord Leatherdale.

Granddam Dolly is an exceptional mare and is the dam of Olympic horse Just Mickey (Tinne Vilhelmson) and produced several licensed sons, two PSG horses and four elite mares. She is also the granddam of the Grand Prix horses Meggle's Boston and Dolman. Dolly herself was titled a "movement wonder" in her day and was twice crowned Dutch Champion Dressage Mare. She has had numerous successes in dressage.

Great-granddam Vanessa was herself successful in show jumping competitions up to advanced level and completes the dam line with numerous thoroughbred sires in the further generations, including Ladykiller xx. Probably the most successful show jumper from this line is Marlou by Jus de Pomme, 5th in the World Cup Final with Kimberley Frey (USA).