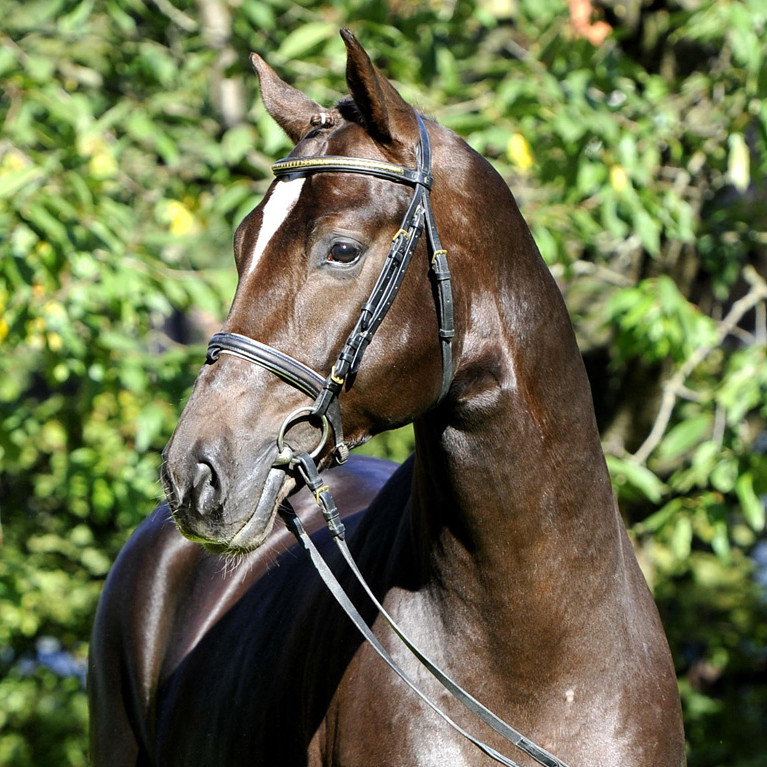 
Terms -  €1500 + VAT, allowing unlimited attempts with chilled semen within the season on one named mare.  If the mare is certified not pregnant by the end of September, then a 50% credit applies the following year to spend on any stallion from the same stud. If the first AI of the year is July 1st or later, the credit the following year is 100%. If the following year also results in no foal, the credit for the next year will be 50% or 100% (depending on the date) of the top-up fee paid in the second year only.

About - In the colour of Donnerhal, Quantensprung enthrals at first sight with his large frame. This terrific stallion has great dynamics and expansive movements in every gait. All three Quantensprung sons at the 2019 Hanoverian Stallion Licensing were approved and his offspring fetched the highest price at the 2019 Verden Auction in November 2019 at 55,000 euro.  In 2016 Quantensprung's first crop of foals, now stallions, created quite a stir at their licensing; seven stallions were licensed and three of them were awarded premium.

Performance - In 2013 Quantensprung finished his 30-day-test with 9.75 points for rideability in the test rider assessment, as well as with highest marks for the basic gaits and the interior. The following year his first year of foals convinced in every regard. His daughter Que Sera was sold for 38,000 Euros at the auction in Medingen. Nine foals of Quantensprung yield an average price of 17,000 Euros. In 2015 Quantensprung became best stallion and Bronze medalist at the World Championships of the Young Horses in Verden. All seven aspiring stallions from his first year of foals presented at licensings were successful and received the licensing. Three of them were awarded premium in Verden and sold for highest rices.

Sire - Quando-Quando won his stallion performance test in 1998. For many years he was among the top of the international dressage horses with his rider Kristy Oatly-Nist. He participated for Australia at the World Equestrian Games in Aachen in 2006 and at the Olympic Games in Hong Kong in 2008. His sire Quattro stems paternally from Qredo de Paulstra, who won the Grand Prix of Bordeaux, maternally from the legendary Furioso xx and was a successful international show jumper.  Quando Quando has already produced the stallion Quaterman, who's first crop yielded Quaterback - Bundeschampion and performance test champion.

Damline - The maternal side of Quantensprung's pedigree is completed by 'stallion of the century', Donnerhall, which leads back to the exceptional mare line of Friedrich-W. Maack, Glücksstadt which provided the National Champion Mare Pik Bube's Girl in 1990. State stud stallions Don Crusador and Don Bosco stem from this dam line as well as several highly successful show jumpers like P.B. Lungau by Landklassiker, successful at 5* level and P.B. Ramiro's Son by Ramiro, successful at 3* level with his rider Sören von Rönne.

Progeny - Quantensprung's early offspring are sensational. At Klosterhof Medingen's Autumn Auction in 2015, seven foals were sold for the average price of 19,000 Euros, while the previous year, his daughter Que Sera was sold at the same auction for €32,000. His licensed son Quantissimo, who previously stood at Klosterhof, is the image of his sire in type and temperament; rideable, easy and kind. This year, his son Q7, the top-selling foal of the 2015 Klosterhof Medingen foal auction for €65,000, will stand alongside his sire.