Sire of the unparalleled Hello Sanctos 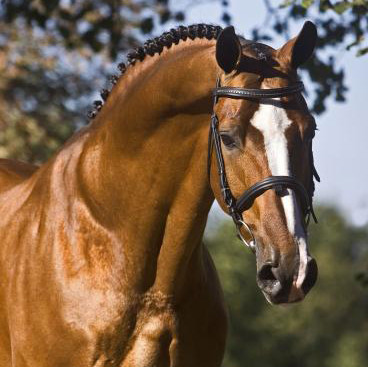 
Terms - Stud fee €1250+VAT, allowing unlimited attempts with frozen semen, for one named mare in one breeding season. If the mare is certified not in foal by the end of September, €950+VAT will be refunded.

About - Quasimodo van de Molendreef is part of a hugely successful family, and is a sire who is growing in prominence in recent years. He not only gives incredible jumping ability, but also beautiful, modern-type models and lots of movement. In the University of Leuven genetic jumping index of 2005 and 2006, Quasimodo came out in the lead, even over his father Heartbreaker.

Performance - He had an impressive early sport career under David Jobertie and Jaime Azcarraga, but was retired early through injury. Before his injury, he competed very well at grand prix level; winning the Grand Prix of Lons le Saunier, third in the grand prix of Vigo, fourth in the finals of the Sires of the World in Den Bosch, and second in the Sires of the World in Mechelen.

Sire - Heartbreaker was declared ‘Preferent’ in 2009 in recognition of his successful offspring in the international scene. Heartbreaker himself was successful at grand prix level with Peter Geerink, and appeared on the WBFSH Sire Rankings for seven consecutive seasons (2009 - 2015). His influence in worldwide breeding is enormous. In the KWPN-studbook he has 10 approved sons and 14 approved grandsons. On the international scene, many of his offspring are competing at the highest level, including Bertram Allen’s Romanov II, who won four grands prix (Bordeaux, Dortmund, La Baule and Paris) in 2016. Also among his offspring are Zidane, ridden by Leopold van Asten, and the approved stallions Cidane, Toulon, Zambesi and Actionbreaker. Heartbreaker is also the grandfather of World Young Horse Champion Earley (Harley VDL x Indorado x Indoctro VDL).

Damline - Quasimodo has a full brother, Actionbreaker, who is also a successful licensed stallion and was individually 11th at the 2010 Kentucky World Equestrian Games. The dam Jarme van't Steentje has produced four other international jumpers, and her daughter Opstalans (by Landadel) has produced a further licensed son, Incredible van de Caatshoeve.

Progeny - Quasimodo's best-known son is undoubtedly the prolific winner Hello Sanctos. Team gold medallist (and individual fifth) at London 2012, Sanctos and Scott Brash made history in 2015 as the first (and only) winner of the Rolex Grand Slam of Showjumping; consecutive victories in the world's three most prestigious grands prix of Aachen, Geneva and Spruce Meadows, for a bonus of €1,000,000 (final round shown in video tab). Sanctos has also won six GCT Grands Prix, and Scott was twice winner of the GCT Global Champions Tour, largely thanks to the phenomenal success of this top horse. The pair have also won World Cup qualifiers in Wellington and Oslo, the Rolex IRJC Top Ten Final, and an individual bronze medal at the 2013 Europeans.