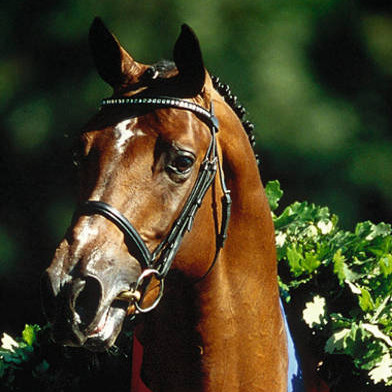 About - Quidam's Rubin was proving himself a top sport and breeding prospect, when he died unexpectedly as an eight-year-old. At his 30-day performance test in Prussendorf in 2002, he received the maximum possible score of 10.0 for his jumping ability for the first time, a feat that would be repeated many times in his short career. In 2004 he won novice and elementary level jumping classes for young horses, and in the autumn of that year he left his 70-day test in Neustadt-Dosse as the undisputed victor.

Sire - Quidam de Revel is a legend on his own; he has an impressive list of achievements and he himself participated in the Olympic Games in 1992, winning team bronze and finishing fourth individually under Hervé Godignon for France. His dam, sire and grandsire all competed at grand prix themselves - cementing his pedigree as one of supreme reliability. His dam produced a total of four licensed sons, one of them a full brother to Quidam de Revel, and an elite sport mare by Quat'sous, who herself is the dam of three international jumping horses and a CCI2* eventer. Quidam de Revel's two full sisters have produced three licensed sons between them, as well as several sport horses. Ten off his offspring competed at the 2002 World Equestrian Games, including team gold medallist Dollar de la Pierre, who also won a team silver at the 2003 Europeans and finished 7th individually. He has produced more than 130 grand prix offspring, inclduing Maikel van der Vleuten's Verdi, super-sire Nabab de Reve, Guidam, Quasimodo Z, Lys Platiere, Rahotep de Toscane, Quiwi Dream, and Quite Chin Chin Z. Quidam de Revel brings a lot of Thoroughbred blood into the pedigree, with three full-blood stallions in the third generation.

Damline - Quidam's Rubin's dam Helvecia, who competed as Lamante, successfully jumped up to 1.55m level under Uwe Deyle. Damsire Landgraf I is one of the most influential Holstein sires in history; his progeny have won more than €4.48million in prize money and include Libero H, Labrador, Lanciano, Landjunge, Lesotho, Libertino, and Landstreicher. The mareline has produced the licensed stallions Courage and Lionheart, as well as several international jumping horses and the grand prix dressage horse Larino 39.

Progeny - Despite his short breeding career, Quidam's Rubin has proven himself an immeasurably valuable sire of jumping horses. He produced numerous winners at foal shows and championships, as well as price highlights at several auctions. In 2003, the Oldenburg Verband awarded him the coveted Hauptprämie, in recognition of his outstanding first crop of foals. Today, he has more than 30 licensed sons, including Quidamo, Quinnus I-III, and Quite Rubin, with many having been awarded a premium, anf more than 160 offspring in sport, among them grand prix jumpers Quidam Blue, Quidam's Hero, and the hugely successful Quiet Easy 4 (shown in video), who has notched up a host of wins and placings on the Global Champions Tour, winning the league competition in Mexico City in April 2017, and the Audi Prize Grand Prix CSI5* at Indoor Brabant in March, having also won an individual bronze medal at the 2013 European Young Rider Championships with Chloe Aston.