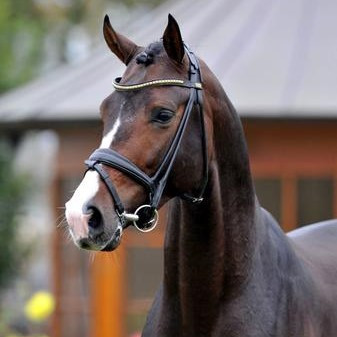 About - Right after the stallion pre-selection, Rock For Me was clearly the favorite. And no one was disappointed at the Westphalian main licensing: a modern stallion with riding horse strengths that can only be described as absolute class and blessed with a talent for movement, which was much admired by the licensing committee as well as the spectators. Rock For Me was crowned the easy champion of the 2014 Westphalian licenseing. In 2014, Rock For Me was the only German colt to be accepted by the Westfalen, Oldenburg and Hanoverian studbooks.

Sire - Rock Forever I was Reserve Champion Stallion, Westphalian Champion, Vice Bundeschampion, third in the Burg Pokal and fourth in the German Championships for young riders.

Damline - Through the dam's sire Florencio I as well as Longchamp (by Lauries Crusador xx) and the trademark Trakehner stallion Caprimond, the best performance bloodlines flow through his veins. The dam line produced the licensed stallions Chatman, Lifeclass, Lauscher, Ray Ban, Avus and Maximilian as well as the advanced (S) level dressage horses Crazy Dancer, Fabriano, Ascot, Andric and Norell.