A beautiful son of Rubinstein famous for his temperament and rideability 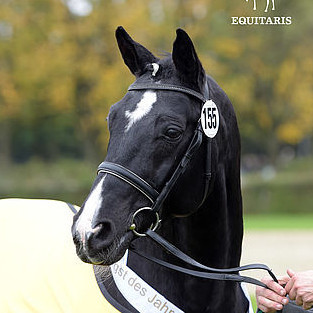 About - Rotspon is a beautiful stallion who is famous worldwide for his fantastic temperament and rideability, which he passes on to his offspring. He also has three excellent basic gaits, in particular a fantastic walk and a supple, elastic trot. He was the easy winner of the stallion performance test in 1998, scoring an excellent 148.82 points in the dressage category.

Sire - Rubinstein is from the 'R' line, famous for good temperaments and rideability. Rubinstein has sired more than 100 licensed sons, many of whom have reached grand prix, including Rohdiamant, Rafurstinels, Rubiquil, Royal Diamond, OO Seven, Regardez Moi, Silvano 71 and Royal Rubin. Rubinstein competed succesfully at grand prix with more than a dozen wins. He is by Rosenkavalier, who is by Romadour II, the sire of World and Olympic champion, Rembrandt, out of Rosenkavalier's dam Antine’s full-sister, Adone. From another full-sister, Annette, came Romancier (also by Rosenkavalier) who stood at the Blue Hors Stud in Denmark and is the damsire of the hugely popular Fürst Romancier.

Damline - Damsire Argentan I has a licensed full brother, Argentan II, and five state premium full sisters, who between them have produced a licensed son and 13 state premium daughters. Argentan's most famous son is the prolific jumping sire Argentinus, whose offspring include Arko III, All Star 5, Thunder van de Zuuthoeve, and Adlantus.  Third sire Pik Bube competed up to small tour level and is the sire of many licensed stallions including the grand prix stallion Plaisir D'Amour.

Progeny - Rotspon's foals have beautiful heads and good conformation, with a long sloping shoulder, long well set up neck. His son Rosevelt, who is licensed with the Hanover Verband, was part of the Olympic bronze medal-winning team for the USA at Rio 2016 scoring over 76% in the freestyle, and +72% and plus 73% in the grand prix and the special. Rotspon has more than 15 other offspring competing at national or international grand prix, and more than 25 licensed sons including Royal Blend and Woodlander Rockstar.