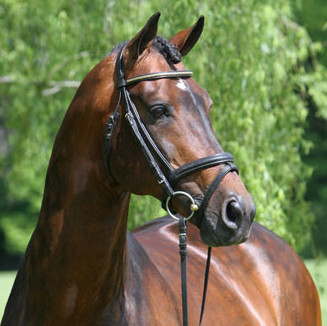 
Terms - €2000 + VAT for up to three attempts with frozen semen on one named mare in one breeding season. No refund if the mare is not in foal. Also available at €250 + VAT per straw, sold without terms - please enquire for details.

About - Rousseau is one of the top stallions for producing rideable offspring, with easy, kind temperaments. In 2007, he had the highest dressage index of any KWPN stallion on a score of 181. He is a tall, large-framed stallion with plenty of bone and a strong shoulder, with a well-connected topline.

Performance - Rousseau had a stellar young horse career; Dutch National Champion as a four-year-old, reserve the following year, and a silver medal at the World Young Horse Championships as a five-year-old. He also won the 2001 KWPN Stallion performance testing, and under Dutch rider Nicolette van Lierop, he won the 2002 Pavo Cup Finals and 2002 & 2003 KWPN Stallion Competitions.

Sire - Ferro is a dressage legend, who competed at the highest level, including at the Olympics and European Championships under Coby van Balen, and then went on to become one of dressage's major foundation sires. He produced a dressage dynasty, with his most notable offspring being - among others - Negro, Kennedy, Metall and Rhodium. He has more than 35 licensed sons and is grandsire of many gold medallists including Uthopia and Valegro.

Damline - Damsire Roemer has the impressive accolade of having not only competed at grand prix dressage, but also having jumped to 1.40m level. At least three of his sons also jumped at grand prix, including the licensed stallion Boy-B, while six sons reach grand prix dressage, among them Winston and Darwin, both licensed with the KWPN. Dam Zsuzsa had such an excellent temperament that her owner's daughter rode her to her wedding!

Progeny - Rousseau's offspring have been exceptional. From 2006-2008, Rousseau produced three successive KWPN licensing champions (Wamberto, Zack, and Ampere), a feat never accomplised by any stallion before or since. All three performed outstanding performance tests and are now successful stallions in their own right. He has also produced the Hanoverian performance test champion, Fiorano, who has scored +71% at international grand prix, and the Celle State Stud stallion Fürst Rousseau.

All of his offspring have scored fantastic marks for temperament, rideability, paces and type, with the KWPN noting that the trot is light-footed, balanced and with much cadence. Rousseau really stamps his foals with his type and character.