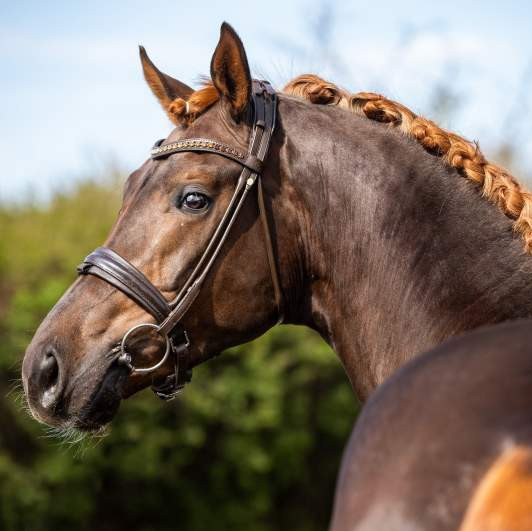 
Terms- €1000+VAT for unlimited attempts with chilled semen, for one named mare in one breeding season. If the mare is certified not in foal by the end of September, €700+VAT will be refunded.

About & Performance - San to Alati is an extremely handsome Secret son, bred out of a dam by Belissimo x Florencio x Michelangelo/T. Behind this is what is probably the most important Trakehner line. San to Alati received the "9" four times on the occasion of his first riding horse test in summer 2021, which he won.

In September he completed the 14-day test in Adelheidsdorf with a dressage final score of 8.5 and the second-best dressage result among 36 participants. There was only a "9" for rideability, as well as for trot, character, interior and willingness to perform. This dark chestnut is a real eye-catcher with his noble appearance and almost captivatingly beautiful colouring. The extraordinary canter that leaps far up leaves nothing to be desired, the trot is designed to be energetic in a natural uphill direction and the surefooted step is already a dominant legacy of his striking grandfather Sezuan, the three-time world champion of young dressage horses.

Sire- San to Alati's father Secret was the 2020 Bundeschampion of six-year-old dressage horses. Thanks to his excellent rideability and willingness to perform, the stallion enjoys the highest reputation in sport and breeding. The distinctive grandsire Sezuan by Blue Hors Zack was a three-time world champion of young dressage horses and is in the process of founding his own stallion line. Strikingness, rideability and an unwavering walk are the dominant characteristics of his offspring.

Damline- Dam's sire Belissimo has become a popular figure in German dressage horse breeding and is considered the lord seal keeper of the great legacy of the Bolero in the male line. Rideability, interior and willingness to perform are the coveted attributes that also distinguish Belissimo. With the double world champion of young dressage horses Florencio, another proven dressage horse sire follows in the third generation, who carries the blood of the trademark stallion Florestan. San to Alati's dam is the Hanoverian premium mare Bella Florenzia by Belissimo, victorious and highly placed in tests for young riding horses and dressage horses. She completed her SLP with a straight "8"! Her full brother Bellis Blue Label is victorious at advanced level up to St.Georg Spezial.