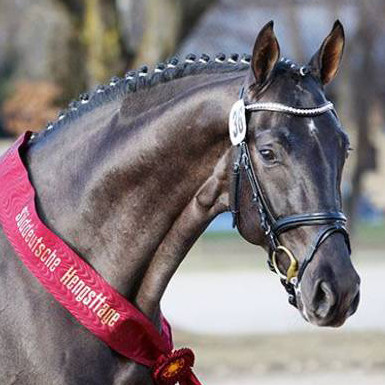 About - Santo Domingo is a quality young dressage stallion with three equally good gaits. The mechanics of his gaits are very good, from a well-connected topline, and he  is an elegant, refined type with plenty of length in the leg.

Performance - At the end of 2014 he finished his 30-day test in Schlieckau with scores of 9.25 from the guest rider. In 2015, Santo Domingo started his competitive career successfully, with many wins and placings in young horse classes; he was riding horse champion of Saxony-Thuringia in Burgstädtand, and was third at the Southern German Championship in Nördlingen. Santo Domingo then finished his 70-day test in Schlieckau with good scores.

Sire - San Amour I has been a constant supplier for auctions, shows and championships. Several Bundeschampions and 37 licensed stallions are sired by San Amour, including Sandbrink, Champion Stallion of the Southern German licensing 2011. He was the dressage champion of his performance test, twice scoring 9.5 for his rideability. He achieved a fantastic overall score of 126.49. He was a premium stallion at Vechta, and was the price highlight of the ensuing auction. He was awarded the Hauptprämie in recognition of his outstanding first crop of foals, and in the same year he qualified for the Bundeschampionat, and was placed in the final.

Damline - The damsire, Fürst Heinrich, was champion of his performance test in 2001, Hauptprämie winner as a four-year-old, and World Champion of five-year old dressage horses 2003 in Verden. In just a few years, he developed to an absolute star among all sires – he presented over 50 licensed stallions and more than 100 state and Verband premium mares. Among his best-known offspring is the double World Young Horse Champion, Woodlander Farouche.

The grand-dam, state premium mare Power Girl, was placed with the best in young horse classes. Her sire, Royal Dance, was champion of the Oldenburg licensing in 1998. Via Rohdiamant and Donnerhall he connects the finest dressage blood, and in only two years of breeding, he produced three licensed sons before continuing his career in the Netherlands. The great-granddam of Santo Domingo, Paloma, was victorious in show jumping up to medium level, while her full sister Parodie delivered the internationally victorious licensed jumper stallion Goldwing. The Holsteiner Lucarno, found in fourth generation, participated successfully at the Bundeschampionat in Verden. Later, he won several medium level show jumping competitions and placed in advanced classes. His licensed son L'Ami was an absolutely exceptional horse that won many grands prix.

Progeny - Santo Domingo's first crop in 2015 produced numerous premium-awarded foals in several different studbooks. At the German foal championship in Lienen, Santo Domingo's offspring were placed first and fourth and were also price highlights at the auction in Nördlingen (€23,000) and Vechta (€48,000).