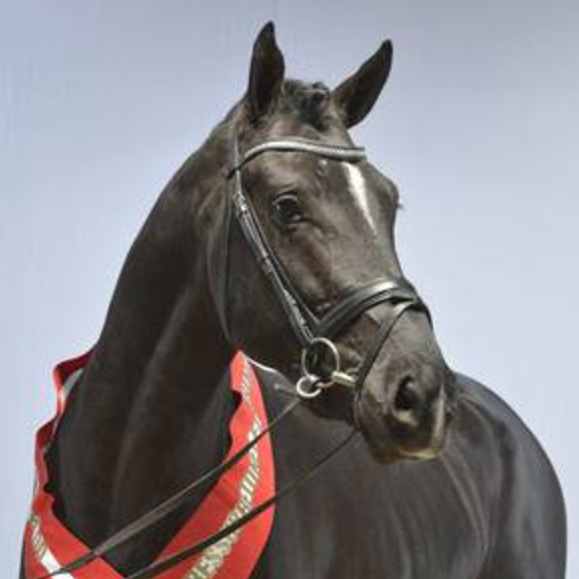 About - The unrivalled winner of his performance test with 987.50 points, Sezuan made history when he obtained a record breaking result of  ten scores of 10.0, more than meeting the high expectations placed on him. As a 3-year-old stallion, he won many European dressage experts' hearts with his outstanding gaits and high rideability, and as a result he became one of Europe's most popular young stallions. His extended walk is noted for its huge overtrack, and the trot is elastic, but it is the canter where Sezuan truly excels; at the seven-year-old World Championships, Eurodressage.com noted that Sezuan was "super-strong behind, sits well in the half pirouettes and produces very big flying changes," also commenting the the canter was ground-covering and uphill.

Performance - Sezuan's young horse career has been outstanding. As World Young Horse Champion as a five-, six-, and seven-year-old, Sezuan is unbeaten at FEI Young Horse level, with scores of over 9.7 in the five- and six-year-old finals.

Sire - In recent years, the sire Zack has proven his worth as a breeding stallion with several approved sons, and as a sport horse, having won the international prix st georges and inter I classes at Odense (2015) and Herning (2016) on scores of +74%. He is now competing at national grand prix level, winning both the straight and freestyle classes at Ankum in 2016. In 2013, he sired the champion three year old stallion, Blue Hors Zee Me Blue – and also sired the performance test winner that year, Vincent Maranello. In 2012, he was the sire of the licensing champion, Zorba Højris, the four year old champion, Zonik, and first, second and third in the licensing test. At the 2014 Danish licensing, Zack was proclaimed Stallion of the Year, having sired 22 approved sons and two gold medal mares. So far, 85% of his daughters passed their riding tests and were graded in the main studbook.

Damline - Sezuan's dam Don Romina is by the world-famous Don Schufro, who won Olympic bronze under Andreas Helgstrand as part of the Danish national team in 2008. She received the Danish Warmblood's breeder gold medal and was nominated best dressage mare of the year in 2006. The grand-dam is the bronze medal mare Bøgegårdens Laina. Don Schufro adds the vital Donnerhall blood, while on his dam's side is the dressage legend Pik Bube I.

Progeny - Sezuan has already produced four licensed sons from his first two crops; an impressive record for such a young stallion. The best of these was the Oldenburg premium stallion Sam, out of a mare by Licotus. His daughter Sezua won the Baden-Württemberg Riding Horse Championships, placed fourth at the Southern German Championships and participated in the Bundeschampionat. Baunehojens and Maskedals Beat It qualified for the final ring at the Danish Elite Broodmare Show. Throughout Europe Sezuan’s foals are setting totally new standards. Strandagergards Sirocco sold at auction as a foal for an outstanding €74,000, and in 2015 Sezuan produced the filly Schwarze Schwalbe Macohl, the Danish Foal Champion.