A Sezuan son with a triple dose of Donnerhall 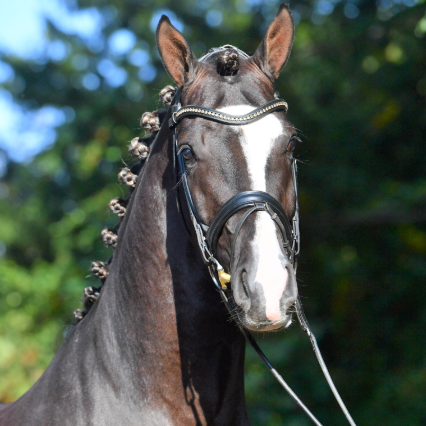 Performance - He won his 14-day performance test in Neustadt-Dosse on an outstanding score of 9.34, and went on to dominate in the 50-day test in Schlieckau, winning on 9.19 with the perfect score of 10.0 for his canter, and 9.5 for rideability, willingness to perform and overall impression.

Damline - Damsire Sir Donnerhall I is one of the best sires in Germany. A son of the great Sandro Hit, Sir Donnerhall is the sire of the double World Young Horse Champion, Sa Coeur (2012 and 2013), who sold for a staggering €2.3million at the 2012 PSI Auction in Germany. The only horse to have exceeded this was the Sandro Hit daughter Poetin, who sold for €2.5million in 2003. His son Sir Heinrich was Oldenburg champion four-year-old and Vice Bundeschampion, and Stanford was bronze medallist of the three-year-old stallions. Sir Donnerhall himself was Bundeschampion as a five-year-old, and Vice World Young Horse Champion.

The dam Siola is a three-quarter sister to the licensed small tour stallion San Schufro, and she also produced a second licensed son by Vivaldi. The direct damline produced the stallions Dubiole and Don Furitello, and Sezuan’s Donnerhall represents the Oldenburg bloodline of Gula, a branch of the Heidemei family from which descend the licensed stallions Almati, Uruguay and Quick Star IV, the Oldenburg Champion Mare Fichu and the internationally successful show-jumping horse Heidegirl von Wichenstein.