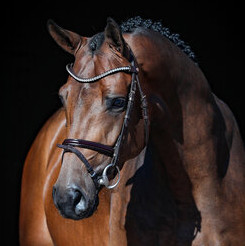 
Terms - €700 + VAT for unlimited attempts with chilled semen on one named mare in one breeding season, if the mare is scanned not in foal by the end of September €400 + VAT will be refunded.

About & Performance - Sherlock van ́t Huka is an extremely typical, modern and fantastic jumping son of Catoki. Already during his performance test, his jumping ability, the character and the willingness to perform were rated particularly highly. Light-footedness, athleticism and quick reflexes promise a lot for the future.

Sire - Father Catoki was able to show with Philipp Weishaupt several victories and placings in World Cup jumping, Nations Cups and Grand Prix. Several of his sons have so far been able to receive a positive judgement in all German breeding associations and are successful even at S level.