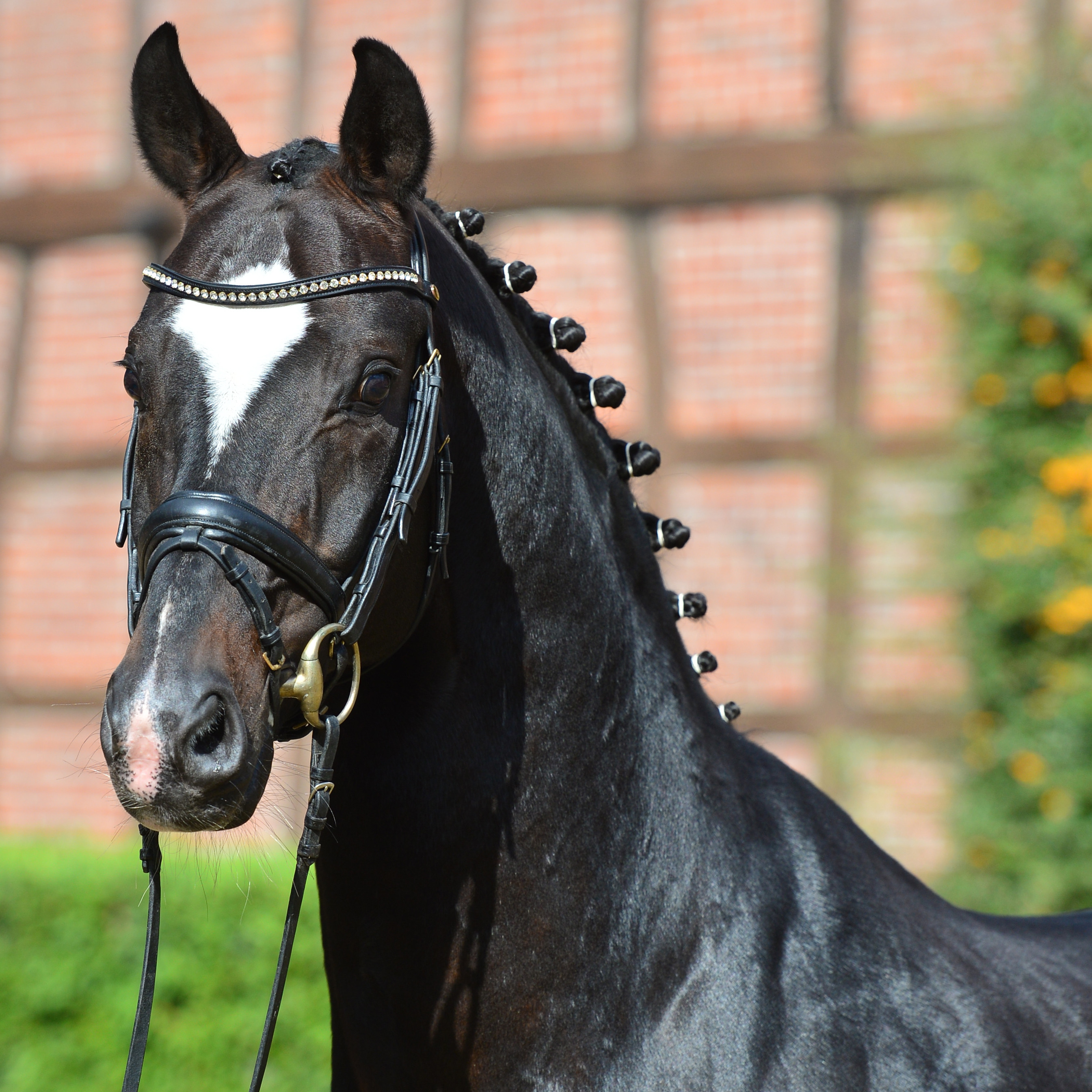 About - Sir Donnerhall has been one of our most popular dressage stallions for many years, with good reason. He is a champion in every respect, and has built a brilliant reputation as a breeding stallion. Even as a young horse, he fascinated onlookers wherever he went with his feather-light movements and exceptional presence.

Performance - Sir Donnerhall was second reserve at his licensing, won his performance test and was awarded his generation's Hauptprämire, awarded for the best first crop of foals sired by stallions licensed in the same year. In 2006, Sir Donnerhall was five-year-old Bundeschampion, and went on to be Vice World Young Horse Champion. The German FN breeding valuation ranks Sir Donnerhall I, who has himself been trained up to Grand Prix, as one of the best sires of dressage horses, with 150 points and 99% reliability for youngsters, and 135 points and 97% reliability for sport horses.

Sire - Sandro Hit has become a legend in his own lifetime. He was Bundeschampion and World Champion as a six-year-old in 1999, dominating both competitions from start to finish. Ten of Sandro Hit's progeny have followed in his footsteps by winning the Bundeschampionat. His offspring are competing in advanced level dressage and Salieri OLD has won several international Grand Prix with his rider, Victoria Max-Theurer. The Rio 2016 were a showcase for Sandro Hit; his son Showtime FRH was part of the German gold medal-winning team, and sixth individually, while Santano II was team bronze medallist in eventing for Australia, finishing fifth individually having led overnight. Sir Donnerhall's full brother, Sir Donnerhall II OLD, competes at grand prix under Morgan Barbançon-Mestre.

Damline - Damsire Donnerhall appears in the pedigree of almost every top-level dressage horse competing today. Donnerhall won numerous international grands prix, including team golds at the 1994 & 1998 World Equestrian Games and the 1997 European Championships, and two individual bronze medals (1994 & 1997). Donnerhall ranked inside the top 10 of the WBFSH Sire Rankings for seven consecutive seasons (2008-2014). Donnerhall's offspring include Damon Hill, Donnerschlag, Donnersong, Don Schufro, Don Principe and Donnperignon and the legenday De Niro. Sir Donnerhall's pedigree is the perfect combination of genes from Sandro Hit and Donnerhall and he is out of the Brilliant Ring mare Contenance D. He received the highest dressage index score ever awarded to date of 163 points in his 70-day test.

Progeny - A consistent sire of performance horses, Sir Donnerhall's offspring's achievements have been impressive. He produced the North Rhine-Westphalian champion stallion Silbermond, another of his sons sold for the highest price of €195,000 at the Hanover auction and he produced two of the premium stallions in Oldenburg. His progeny also include valuable horses such as Sonnenreiter and Sir Rubinstein, who sold for €120,000 and €105,000, respectively. The popularity of Sir Donnerhall's offspring was already evident back in 2008 when Schickeria sold at the North Rhine-Westphalian Elite Auction for €355,000, and Sankt Hülfer received the highest bid at the Vechta Auction of €300,000. Sir Donnerhall's first crop of foals includes South German champion stallion Sir Nymphenburg - who went on to be champion stallion.

In 2012, all these high prices were swept aside when the Sir Donnerhall son Sa Couer was five-year-old Bundeschampion, and then sold for €2.3 million at the PSI auction. Sa Coeur was double World Young Horse Champion under Eva Möller in 2012 and 2013, and is now national champion at inter I under Britain's Michael Eilberg. In the same year, Sir Heinrich was Oldenburg champion four-year-old and Vice Bundeschampion, and Stanford was bronze medallist of the three-year-old stallions. In the PSI auction, Sir Caramello, Sieberstien and South Coast have all commanded half-million euro bids.

Sir Donnerhall has severall offspring competing at grand prix, including the four licensed sons Sir Donato, second in the grand prix at Saumur 2015, Galliani Biolley, Sir Fashion and Sir Schiwago. His son Sir Radjah won the grands prix of Madrid and Oliva Nova under Beatriz Ferrer-Salat and has only been out of the top ten once in 28 international grand prix starts - in 2016, he was never out of the top six.

He also has successful eventing offspring; Jeno won the CCI2* at Barroca D'Alva in March 2017, while EH Seabiscuit was third in the CIC2* at Ravenna and third in the CCI3* in Vairano.