An imposing stallion with a terrific character! 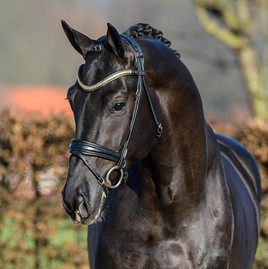 
Terms- €1000 + VAT for unlimited attempts with chilled semen, on one named mare in one breeding season. If the mare is certified not in foal by the end of September, €700 + VAT will be refunded.

About- Skyline To B won gold at his very first competition: under Carl Hedin he became Swedish Champion of Three-Year-Olds in Flyinge in 2021 - with an outstanding final score of 9.02. He achieved a 9.5 for canter, a 9.3 for overall impression, a 9.0 for trot and rideability and an 8.3 for walk. Skyline To B traces back to the highly successful line of Spinda, originally widespread in Hanover and then also in Sweden, and is related to, among others, the Olympic Team gold medalist Mistral Højris (by Michellino), the Olympic individual silver medalist Briar (by Magini) and the European Eventing Team bronze medalist Golden Midnight (by Goldmine xx).

Sire- The sire St. Schufro, who combines the Sandro Hit, Weltmeyer, Donnerhall and Atatürk lines, is meanwhile victorious up to Grand Prix. Previously, he won international tests in the Small Tour with over 77 percent. Several of his sons have already been licensed and sold expensively through the stallion markets. His sporty offspring set the tone at the championships.

Damline- Skyline to B's dam is by Ampere a noble and elegant stallion with a beautiful head.  Ampère won the Dutch performance test – the 70 days performance test in Ermelo – in 2008, with very high scores (walk 8; trot 9; canter 9.5; ridability 9; talent as dressage horse 9). During the test, riders praised him as the best horse they had ridden in years. Fortunately, he passes his exceptional gaits on to his offspring. As a dressage horse, Ampère has a lot of talent and he gives the rider a very good feeling. He is an honest, reliable and sensitive stallion, with a very good work ethic.