One of the last sons of the great Voltaire 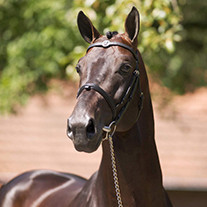 
Terms - €900+VAT for unlimited attempts with frozen semen, for one named mare in one breeding season. If the mare is certified not in foal by the end of September, €600+VAT will be refunded.

About & Performance - Solitair has superb jumping talents with great movement and very appealing conformation. At his performance test in Ermelo, he received an 8.5 for his canter and for walk, trot and talent, three 8.0's. His sire Voltaire jumped internationally at the highest level with Jos Lansink and Emile Hendrix. In addition, Voltaire, has more than thirty registered off spring in the Breeding Guide for international showjumping horses, belongs among the best stallions in the world.

Sire - Voltaire was the sire with the most offspring at the Olympic Games of Atlanta in 1996. Moreover the world famous Voltaire is second on the World Breeding Ranking of Showjumping Sires. Voltaire has over 50 approved sons. Many of his offspring jump at Grand Prix level, i.e. Finesse, Altaire, Kahlua, Play it Again, Helios, Electro, Kannan, Especial etc. etc. Foltaire, ridden by G. Seidel is a famous offspring of Voltaire in the international dressage ring. Voltaire has been awarded Huntersire of the Year 2001, 2002 and 2003 in the USA! At the moment Voltaire is one of the top sires in the KWPN Jumping Index with 151 points.

Damline - Solitair was bred out of the dam Nigrante, a beautiful daughter of the legendary Holsteiner stallion Libero H with whom Jos Lansink won the 1994 Den Bosch World Cup finals. Of the small group of Libero H’s offspring Iowa, Numero Uno, Luc, Liberty, Maike and No Mercy are very successful in international showjumping circuits. Both Maike and No Mercy were two of the top horses in the 2004 Olympics. Nigrante not only received high recommendations by the KWPN approval committee but has also produced the International show jumper Triviant.