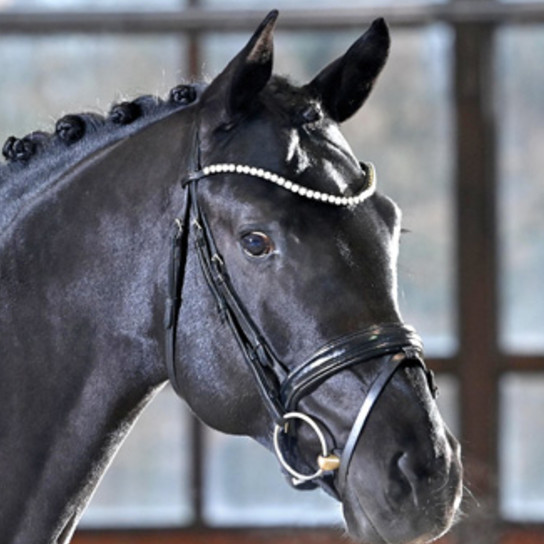 
Terms-  €900 + VAT for unlimited attempts with chilled semen in one breeding season.If the mare is certified not in foal by the end of September, then a 50% credit applies the following year to spend on any stallion from the same stud. If the first AI of the year is July 1st or later, the credit the following year is 100%. If the following year also results in no foal, the credit for the next year will be 50% or 100% (depending on the date) of the top-up fee paid in the second year only.

Sire - In 2021, father Suarez, son of three times World Champion Sezuan, provided his first offspring for licensing and was in the finals of the World Championships of the six year old dressage horses.
He finished his 35-day performance test of the Danish warmblood with 837.50 points, ranking third. In 2018, Suarez was the most frequented dressage stallion in Sweden.

Damline - His mother Damandala comes from a highly successful dam line. She is full sister of Desperada, mother of licensed stallion Glock‘s Toto Jr, who won the Pavo Cup in 2015 and 2016. Damandala also is full sister of premium stallion Decurio and half sister of state premium mare Sinphonie. Her father Desperados was highly successful in international dressage with rider Kristina Bröring-Sprehe and won the team gold medal and the bronze medal at the Olympic Games in Rio in 2016.
On the mothers side, Dante Weltino speaks for himself: two times European Championships team bronze medal, place four at the World Championships and participant at the Olympic Games in Tokyo with rider
Therese Nilshagen (SWE).
Among his 21 licensed sons are the Southern German champion stallion Dante‘s Stern and many other
premium stallions. He provided Atterupgaards Lady Hamilton, champion mare in Denmark. His up to Grand Prix level successful offspring are lead by Hanami OLD, placed fifth at Louisdor-Preis. His mother, state premium mare Rihanna is full sister of Olympic participant state premium mare Riwera de Hus OLD and half sister of German National Young Horse Show Jumping champion and Badenia winner Lumos (by Lordanos).
Grandmother state premium mare Tia Romina is mother of licensed Don Chico and Grand Prix horse Sweet Kiss. The stem also provided the stallions Blue Hors Rockefeller, De Royal and Rumicello