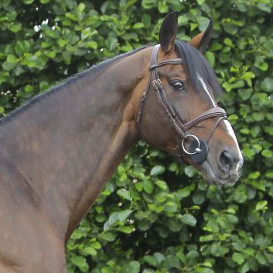 
Terms - All Schockemöhle stallions will be offered on a pregnancy basis only (no single doses available). €2000+VAT, allowing unlimited attempts with frozen semen, for one named mare in one breeding season. If the mare is certified not pregnant before the end of September, then a 50% credit applies the following year to spend on any stallion from the same stud. If the first AI of the year is July 1st or later, the credit the following year is 100%.

About - Talan is an international superstar who jumped at the very top level for many years, first for Great Britain and then for Saudi Arabia. After a glittering young horse career under Robert Smith, Talan was sold to Saudi Arabia shortly before the London Olympic Games. He went on to compete under the Saudi Arabian flag for a further six seasons, before retiring in 2017, and is now available to UK breeders with chilled semen for the first time in many years.

Talan is a tall, large-framed and powerful stallion, with very good adjustability and rideability. In the 2011 Dublin Nations Cup, Talan made nothing of the heavy ground to jump a brilliant clear and lead the British team to take the win.

Performance - Talan has racked up many international wins and placings during his career, including a win in the Mostaganem World Cup qualifier, and second in the King George V at Hickstead in both 2010 and 2011; in total Talan has more than 20 top-10 finishes in international grand prix. He also competed at two World Equestrian Games; Lexington 2010 with Robert Smith and Normandy 2014 with Prince Faisal al Shalan for Saudi Arabia.

Sire - Concorde was an international grand prix jumper with Jos Lansink. They won the Grand Prix of Nordrhein-Westfalen at Aachen, were champions of the Netherlands in 1994, and placed second in the grands prix of Amsterdam, Darmstadt, Lanaken, Helsinki and Gothenburg. For three successive years, Concorde presented the most offspring at the World Breeding Championships. In the year 2001 alone, Concorde produced 17 jumpers who entered grand prix ranks, including Audi’s Jikke, Audi’s Kathja, Conquest II, Larino, Viktor, Jacquet, Humphrey and Isabella. In 2003, three of his progeny, Marius Claudius, Conquest and Viktor, qualified to go to Las Vegas for the World Cup final. Concorde's sire Voltaire is a foundation stallion in jumping breeding and has produced countless grand prix horses and stallions.

Progeny - Talan's availability has been extremely limited, and as such his list of offspring is smal, but his British-bred daughter Talanted is successful up to 1.30m level.