Stallion from the highly successful dam line of Feuerstein 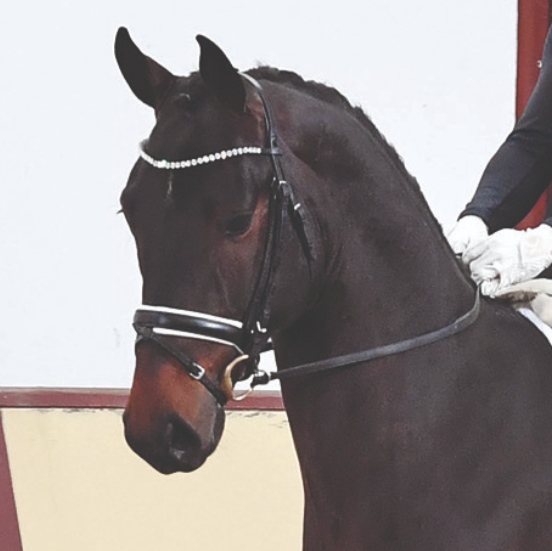 About & Performance - This up and coming stallion has the ideal movement and conformation a breeder could ask for with a pedigree of the highest class. Total Diamond PS, a son of Totilas out of the German Champion Special Diva, has been given everything by nature. His sire Totilas was double gold medallist at the European Championships in 2009 and triple gold medallist at the World Equestrian Games in 2010.

Sire - Totilas was the first horse in history to break the 90% barrier, scoring 90.7% to take home individual and team gold at the 2009 Windsor Europeans. He followed this up with three gold medals at the 2010 Kentucky World Equestrian Games, having also scored 92.3% at Olympia 2009 to set a record that would stand for four years. In 27 appearances at international grand prix with Edward Gal, Totilas scored over 80% on 24 occasions. The pair won three World Cup qualifiers and then the World Cup Final as 's-Hertogenbosch on a score of 89.8%. Under Matthias Rath, Totilas was part of the silver medal-winning team at the 2011 Rotterdam Europeans and finished fourth individually. On his only appearances against Valegro (at Aachen 2014), Totilas was the undeniable victor; winning both the grand prix and the grand prix special on 82% and 84%.

Damline - His dam Special Diva was German Champion of three-year-old horses in 2014 with Heiko Klausing and subsequently won many dressage competitions with Isabel Freese/NOR. Her son Monterey (by Morricone I) was premium stallion at the Oldenburg licensing in 2018, Nuit D'or (by Negro), who was sold at the P.S.I. auction in 2017, is victorious in young dressage competitions, and his younger full sister Natascha Diva was also sold at the P.S.I. auction in 2018.

His grand-dam Die Minelli has also produced stallions, her son Brillant (by Bretton Woods) was Champion Stallion of the Mecklenburg Licensing Days in 2014. Decor Siebenstein (by Sir Donnerhall I) was sold for over 500,000 Euros at the P.S.I. auction in 2011 and is victorious in Inter II in the Netherlands, Fürst Diamond (by Fürst Romancier) was successful in the international Small Tour with Zina Facklam and Die Minelli's daughter Finella (by Fürst Heinrich) produced the advanced (S) level dressage winner Sid (by L'Espoir).