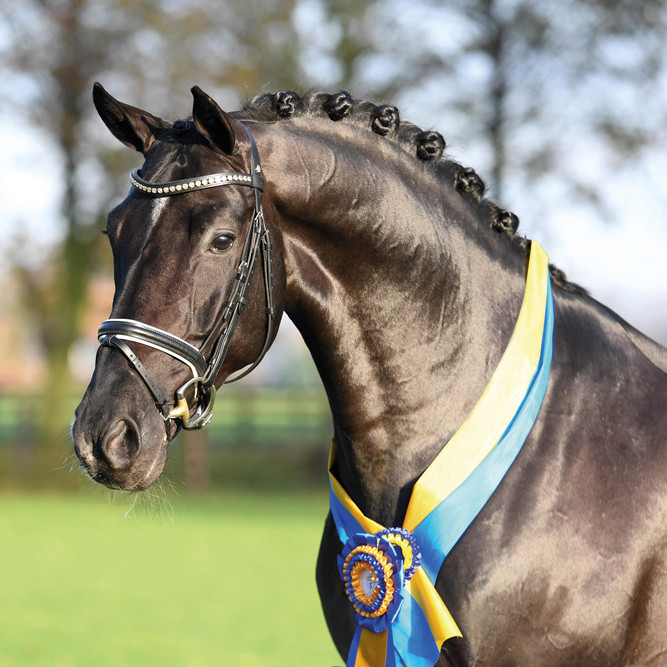 Total Hope is a stallion who makes quite the impression on an audience, he made a debut at Burg Cup Final and was described as a horse with 'pure potential' as only a seven year old. He is a stallion with a huge amount of charisma, he displays maximum elasticity and ground cover, having shown his talents in the sport after displaying exceptional movements. Having currently a number of titles under his belt as the Swedish licensing winner, dressage champion and finalist and finalist at the Wold Championships.

Sire- Totilas was the first horse in history to break the 90% barrier, scoring 90.7% to take home individual and team gold at the 2009 Windsor Europeans. He followed this up with three gold medals at the 2010 Kentucky World Equestrian Games, having also scored 92.3% at Olympia 2009 to set a record that would stand for four years. In 27 appearances at international grand prix with Edward Gal, Totilas scored over 80% on 24 occasions. The pair won three World Cup qualifiers and then the World Cup Final as 's-Hertogenbosch on a score of 89.8%. Under Matthias Rath, Totilas was part of the silver medal-winning team at thr 2011 Rotterdam Europeans and finished fourth individually. On his only appearances against Valegro (at Aachen 2014), Totilas was the undeniable victor; winning both the grand prix and the grand prix special on 82% and 84%.

Damline - His damsire Don Schufro has won multiple World Cup qualifiers, and achieved more than 30 victories and placings in Grand Prix at big shows such as Aachen, Bremen, Wiesbaden, Lingen, Neumünster and Nörten-Hardenberg, with scores over 79%. The highlight of his career was in 2008, when he became Danish Champion and won the Olympic bronze medal with the Danish team in Hong Kong under Andreas Helgstrand. In the individual ranking, they placed 11th.