A modern, expressive son of the great sire Totilas. 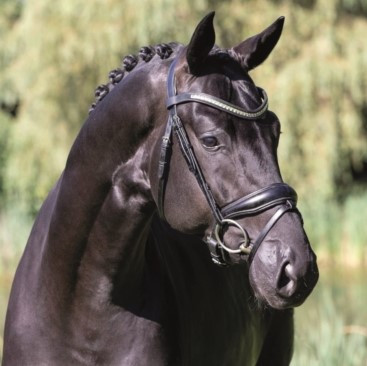 
Terms: €1300+VAT for unlimited attempts with chilled semen for one named mare in one breeding season.  If the mare is certified not in foal before the end of September then you get a 50% credit the following year to use on any stallion from the same stud. If the first AI of the year was 1st July or later, then the credit in the event of non-pregnancy is 100%.

About & Performance -  Total McLaren was purchased during the stallion licensing in KWPN in 2020 in the Dutch Hertogenbosch, where he impressed the judges with his noble expression and exceptional gaits. A picture-perfect take on the modern horse with an outstanding pedigree. The great stallion comes from a very exciting pedigree with Totilas as the sire, who is a three-time world champion and who at just 9 years old managed to win a Grand Prix kür with no less than a score of 90,75% during the European Championships with Edward Gal as his rider.

Sire - Totilas was the first horse in history to break the 90% barrier, scoring 90.7% to take home individual and team gold at the 2009 Windsor Europeans. He followed this up with three gold medals at the 2010 Kentucky World Equestrian Games, having also scored 92.3% at Olympia 2009 to set a record that would stand for four years. In 27 appearances at international grand prix with Edward Gal, Totilas scored over 80% on 24 occasions. The pair won three World Cup qualifiers and then the World Cup Final as 's-Hertogenbosch on a score of 89.8%. Under Matthias Rath, Totilas was part of the silver medal-winning team at thr 2011 Rotterdam Europeans and finished fourth individually. On his only appearances against Valegro (at Aachen 2014), Totilas was the undeniable victor; winning both the grand prix and the grand prix special on 82% and 84%.

Damline - His beautiful exterior comes from the dam-line, where amongst others is the Oldenburger-premium mare, Silberaster OLD, who is a double gold-medal recipient at the German Bundeschampionat and thereby has shown her worth in the sport. The dam-sire, De Niro, has for years been the undisputable number one at the WBFSH world rankings for breeding stallions in dressage.