Championship quality in the genes 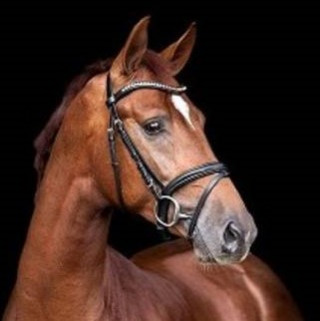 About & Performance - Elite KWPN dressage horse with a breeding pedigree of special class: The highly esteemed Glock's Toto Jr meets the full sister of the World Champion Jovian. Toto Gold is a representative of European dressage horse breeding in its most modern form. Extremely elegant in the frame, correct in the foundation and right from the start powerful, dynamic and at the same time meticulous in every moment of his sweeping movements.

Sire - Sire Glock's Toto Jr was the first licensed son of the recently deceased and exceptional stallion Totilas, who for years was the most successful dressage horse in the world under Edward Gal and was also able to put his stamp on breeding. Toto Jr's Hanoverian mother is a daughter of the Olympic champion Desperados FRH, who was also able to hold the title of the most profitable dressage horse in the world. The stallion performance test winner Toto Jr successfully follows in the footsteps of his legendary father. Under Edward Gal he was able to secure the title of the Dutch master in the dressage arena in 2020 and is ready for international championships. In terms of breeding, he is one of the most sought-after stallions of his generation across Europe.

Damline -  Idol is the full sister of the licensed reigning world champion of the five-year-old dressage horses Jovian. Her father Apache was reserve champion of the KWPN licensing and contested the 2018 World Equestrian Games in Tryon under Emmelie Scholtens (NL). He produced several important stallion sons to the breed and is also the paternal grandfather of the stallion Galaxy, which is why Apache was deservedly chosen as the preferent stallion in the Netherlands in 2021. Idol is also the half-sister of the Intermédiaire I-successful Friend (by Rousseau). The granddam Zinith is the half-sister of the mare Upshot, who in turn is the mother of the licensed Astrix, who won the 2010 and 2011 World Championships for five and six year old dressage horses. Toto Gold's great-grandfather Tango himself was successful in the large arena.