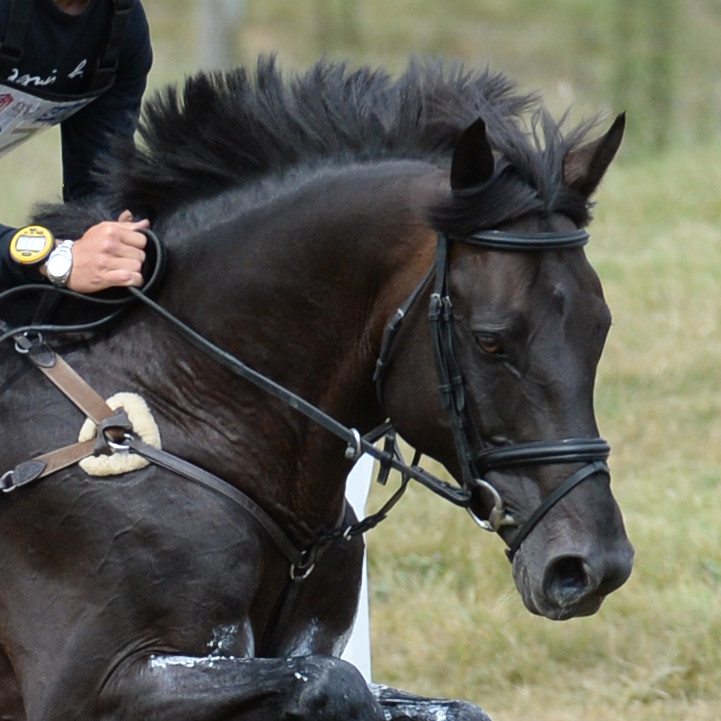 
Terms - €1000+VAT for unlimited attempts with frozen semen, for one named mare in one breeding season. If the mare is certified not in foal by 30th September, €650+VAT will be refunded.

About - Tresor Mail is a stallion following in his father's footsteps, already making a name for himself on the international stage.

Performance - Tresor's first year competing in 2011 earned him third place in the French 4yr old Eventing Final, and he topped the list (by earnings) of all 4yr old event horses in France.  He won his first event, and was then double clear in Pompadour a few weeks later, and completed the year with one more win and a 2nd place.  In 2012 Tresor was the 2nd highest earner of all French 5yr old eventers, and the highest of those registered SF. In 2018, he ranked 18th individually at the FEI World Equestrian Games in Tyron.

Sire - Under Patrice Deleveau, Jaguar Mail had placings at both the French Championships and the World Breeding Championships for young horses. At 7 years old, Jaguar began competing at Grand Prix, and by the following year was already on the WBFSH rankings. In 2007 Jaguar Mail moved to Sweden and began his partnership with Peter Eriksson. After just two months together, the pair placed second at the Swedish Championships and later that year won the “Sires of the World” competition in Lanaken. The following year, Jaguar Mail and Peter were important members of the Swedish Nations Cup teams with placings in Gothenburg, Rotterdam, and Falsterbo. At the 2008 Olympic Games in Hong Kong, the Swedish team placed fifth overall, and Jaguar Mail was 33rd in the Individual Final. In 2010 Jaguar Mail was paired with the young rider Margaux Rocuet. Together they won the French Young Rider Championships in July, were 8th in the Ladies Championships in September, and won several grands prix.

Jaguar Mail’s sire is the magnificent thoroughbred Hand In Glove, who had an exceptional, multi-discipline sport career.  Only lightly raced, Hand In Glove was developed as a dressage horse up to the Prix St. Georges level and as a show jumper, competing at the Grand Prix level. Hand in Glove was accepted by 15 different studbooks and has produced international winners for both show jumping and eventing including Famoso Mail, Frisco Mail, Free Style, and Ikat Mail. Grandsire Best Turn was stationed at the legendary Calumet Farm. He won 15 of his 28 races and sired 24 Stakes winners. He was also a very successful sport horse sire, with his progeny including the International show jumper MVP and the FEI dressage horse Shining Moment.

Damline - The mother Nocturne Mail competed lightly before breeding - she is a daughter of Iowa, by Libero H.  This stallion has been described as a rubber ball - he is supple, athletic and brings huge elasticity to Tresor.  Iowa won the Sires of the World in Lanaken.  Grandmother Nighty Fontaine has been a stellar producer.  Her foal Alligator Fontaine was Champion of France, a great international performer, and given the highest ever sport index in France - 190.  Her other son Frascator Mail (by Jalisco) was a very well regarded international performer, 160th in the world rankings at one point.  Nighty's mother Elyria produced, in combination with Alme, the stallion I Love You - Horse of the Year in the States in 1983, World Cup final winner in 1982 and 2nd place in 1984.