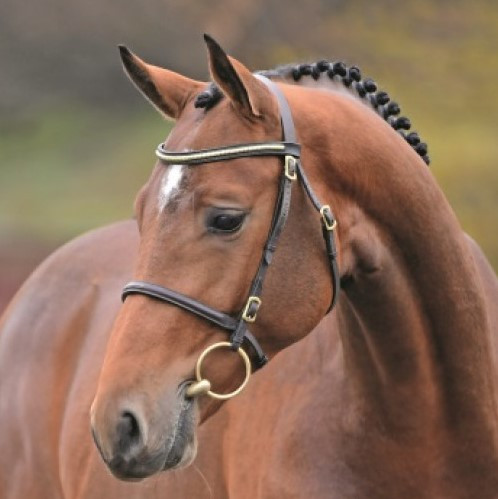 
Terms - €1200 +VAT for unlimited attempts with chilled semen on one named mare in one breeding season, if the mare is certified not in foal by the end of September €850 +VAT will be refunded.

About - The young stallion is typey and modern with a masculine face and big, bright eyes reflecting his wonderful disposition. The Uriko son has excellent movement, displaying three equally powerful, ground-covering, and supple basic gaits, his canter is particularly remarkable. Consistent with his bloodline, he jumps with outstanding technique, scope, and ability.

Performance - United Way had his first outings in competition with Ebba Johansson last season which saw them place second in the qualifier to the State four-year-old jumping horse Championship at a score of 8.2, among other achievements. United Way caused quite a splash during the presentation of the auction foal sires at the Hamburg Derby ground. Ridden by Sandra Auffarth, he impressed international riders and expert crowd alike as he cantered and jumped totally unfazed by the Derby ground‘s special atmosphere. Due to injury, United Way could not be competed in 2021.

Sire - His sire Uriko was successfully shown to S*** level and is establishing more and more of a reputation for his quality offspring. A number of licensed sons, including champion and reserve champion at the Neumünster stallion grading, as well as showjumping offspring highly successful in young horse classes testify to Uriko’s class and importance for the breed. Uriko’s dam Wizzard is a daughter of Lavaletto’s son, Lavito, a maternal grandson of top sire Carthago. Wizzard’s dam line goes back to stem 4173 with crosses to the performance sires Corrado, Rocadero, Fasolt and Marlon/TB. Just recently, sport horses from this stem with international successes like for example Balourado, a Baloubet son ridden by Robert Smith, have attracted attention.

Damline - United Ways granddam Wodka is the dam of the licensed stallions Arturo, Clearway as well as Conway I and II. Eight of her offspring have successes in advanced level jumping. Including the Concerto II daughter Carassina, the mother of United Way. This has already achieved successes up to S *** under the saddle of Nisse Lüneburg. In 2008 it moved into the ownership of Udo Chistee - Schlosshotel Wendorf. Thus Carassina got into the riding of Thomas Kleis. In addition to numerous international successes, this dream couple won the German Jumping Derby in Hamburg in 2009.