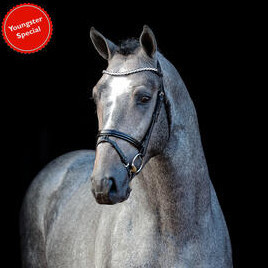 
Terms -  €700 + VAT for unlimited attempts with chilled semen on one named mare in one breeding season, if the mare is scanned not in foal by the end of September €400 + VAT will be refunded.

About & Performance - From his own breeding, this likeable youngster impresses with his ability, his strength and his pronounced intelligence. Urmel Junior inspires us from day 1 to today and we believe that he has a great sporting as well as breeding career ahead of him.

Sire - His father Untouchable jumped under Daniel Deusser to victories and placements up to 160cm and is from the Holsteiner bloodline 18a2, which is one of the largest bloodlines of Holstein breeding. Many of his descendants win and place themselves on international and national tournament courts.

Damline - Grandsire Cornet Obolensky is one of the stamp stallions of recent years. His descendants are omnipresent at international tournaments, championships such as the Olympic Games, World and European Championships. Urmel Junior comes from a very special mother bloodline. His grandmother Arka (v. Argentinus – Beach Boy) is the full sister to Arko III, under Nick Skelton (GBR) who was the world's best show jumping horse at the time, took part in the Olympic Games and has proven a lifetime profit of more than 1.5 million euros.