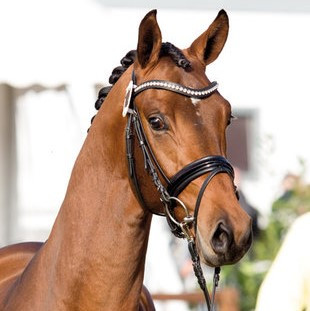 
Terms -  €1100 + VAT, allowing unlimited attempts with chilled semen within the season on one named mare.  If the mare is certified not pregnant by the end of September, then a 50% credit applies the following year to spend on any stallion from the same stud. If the first AI of the year is July 1st or later, the credit the following year is 100%. If the following year also results in no foal, the credit for the next year will be 50% or 100% (depending on the date) of the top-up fee paid in the second year only.

About -  This young stallion pleased with his exceptional paces, his steady rhythm and his expressive performance at his licensing. With many positive comments he is a stallion who knows how to win over a crowd. His sire Vitalis is dominating the breeding world with his offspring reaching top prices at auctions, and receiving high marks at gradings and licensing's.

Performance - In 2020 Va' Pensiero won the Hanoverian Championships as well as the German National Young Horse Championships of the three year old stallions with the overall score of 9.5 points. He continued to excel in his 14-day performance test where he was awarded 10 points on 5 separate occasions, his overall score was 9.38 points.

Sire - His father Vitalis provided many licensed and awarded sons. The sought-after blood of Krack C comes to German breeding through Vivaldi. Vitalis is successful up to advanced level and he won the Nürnberger Burgpokal. Va Pensiero's mother, premium mare Floies stems from Fürstenball, who regularly provided rideable and motivated offspring, among them many German National Young Horse Champions.

Damline - The dam line provided licensed stallions Schumacher by Stedinger, who was Reserve Champion of the German Dressage Horse in 2010, Advocat by Argentan, For Joy by For Pleasure and Forsberg by Wanderbursch Il as well as Delgado, the internationally highly successful son of De Niro who was one of the world best dressage horses and member of the Spanish equip with rider Beatriz Ferrer-Salat for many years.