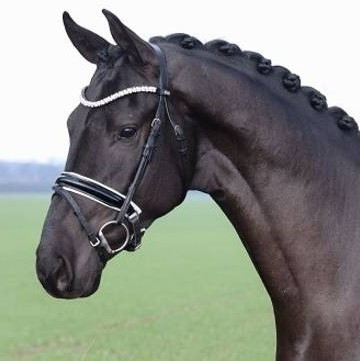 About & Performance - A powerful, radiant black stallion, Van Dijk has an impressive talent for movement in every phase. In the trot work he shows good swing and correct rhythm and is already showing much ability to sit.  The canter is of no less exquisite quality, being supple and well balanced. Even when walking, Van Dijk shows himself to be relaxed and striding generously through the body. With his unshakable nerves and his willingness to perform, Van Dijk is rated highly by his riders and is strongly recommended as a top dressage prospect.

Sire - Vitalis was first reserve champion of the main NRW licensing in 2009, and dominated the dressage index of his stallion performance test in 2010 in Warendorf From the very beginning, he notched up wins and placings in dressage classes, including at the Dutch stallion championships and at the World Young Horse Championships. As a five-year-old, he was sold to American rider Charlotte Jorst, and was placed with her in the finals of the World Young Horse Championships as a six-year-old, having already dominated the US championship in his age-group. With record marks of 10.0 for trot and 9.8 for canter, he was clearly ahead of the other competitors. Since returning to Germany, he has been trained up to advanced level and is successful up to intermediate I. In 2016, he won both small tour classes at Ermelo on scores over 74% with Isabel Freese.

Damline -  Dulina M has the title of main premium mare and is a daughter of the former Celle state stud stallion Duke Ellington. The black horse, bred to high quality by Dancier, Weltmeyer and Matcho x, got off to a good start after a short sire career and is Grand Prix victorious under Anna Kleindienst (AUT). The granddam Lilli M is a daughter of the influential Lauries Crusador xx, who as a thoroughbred stallion produced 109 advanced level dressage horses. With Sherlock Holmes and Brentano II, classic Hanoverian performance sires follow in the pedigree. Van Dijck's grandmother is the sister of the Intermédiaire I successful dressage horse Dante 71 / Daniel Bachmann Andersen (DNK)). The successful horses Lichtblick 36 (Grand Prix) and Flaming Heart (Intermédiaire I) also emerged from the Hanoverian line of the demigoddess.