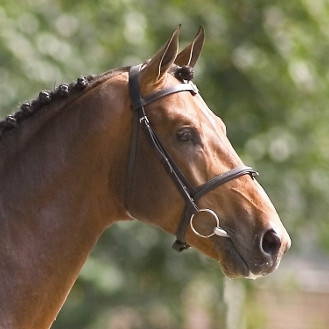 
Terms: €1700+VAT for unlimited attempts with chilled or frozen semen, for one named mare in one breeding season. If the mare is certified not in foal by the end of September, then €1400+VAT will be refunded.

About - Van Gogh is one of the most versatile stallions on our roster. A grand prix jumping stallion himself, he has offspring competing internationally in all three disciplines. He is ranked inside the WBFSH top 100 for eventing and dressage, and is the highest ranked offspring of Numero Uno in the jumping rankings. Van Gogh is an incredible athlete, who scored 9.5 for his canter at his performance test and who has three excellent basic gaits, making him an exciting stallion in any discipline.

Performance - Van Gogh was the undisputed champion of the 2005 KWPN licensing, rewarded for his great jumping skills but also his fantastic movement. He is currently competing very successfully under Marco Kutscher, and his numerous victories include the 2015 Los Angeles Longines Masters, the Valkensward GCT, a 1.50m grand prix at the CSI5*-W in Zurich, and the 2015 Hong Kong Masters. In 2013 Van Gogh was ranked second in the KWPN stallion rankings, and in 2016 they were shortlisted for the Olympic Games. He was second in the Shanghai GCT, and has twice jumped in Nations Cups for the ultra-competitive German team.

Sire - Numero Uno proved himself as a competitor, and now continues to prove himself as a formidable sire of jumpers. In 2016, he was ranked 29th in the WBFSH rankings, spearheaded by Van Gogh. Although his career was mainly focused towards breeding, Numero Uno was the winner of several international speed classes up to 1.40m, proving his supreme athleticism and talent. His sire Libero H was a grand prix competitor himself, and a direct son of foundation sire Landgraf I. Libero's career under Jos Lansink was truly spectacular. At the age of seven he won the Grand Prix at Lanaken, and the following year he won two more grand prix's before really hitting form in 1990, when he was 11th individually at the WEG in Stockholm, and won two grands prix, one World Cup Qualifier and one Nations Cup. In 1994 four World Cup qualifiers and was the outstanding winner of the final in 's-Hertogenbosch. In all, he placed in 211 international competitions, winning 51 of them.

Progeny - Van Gogh's offspring are known by their appealing types, good movement, rideabilty and excellent jumping skills. His daughter Calimera won the silver medal at the six-year-old World Young Horse Championship in Lanaken. His son Cosmo was part of the German Olympic gold medal-winning dressage team at Rio 2016, and he has several offspring eventing at CCI/CIC2* level, including Calibro, winner at intermediate and novice level and fourth in the CIC2* at Burnham Market under Izzy Taylor. His jumping offspring are winning internationally at 1.40m level, including Vallejo, winner of the CSI2* at Riesenbeck. Van Gogh will not produce chestnut foals.