An exceptional french sire with an interesting bloodline alternative. 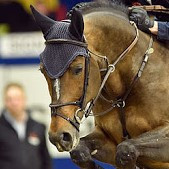 
Terms  - €1200+VAT, allowing unlimited attempts with chilled or frozen semen, for one named mare in one breeding season. If the mare is certified not pregnant before the end of September then a 50% credit applies to spend on a Schockemoehle / Helgstrand covering the following year. If the first AI of the year is July 1st or later, the credit the following year is 100%.

About - Varihoka du Temple is a stallion who is known as an exceptional french sire, wth his outstanding performance history he is a stallion who has it all. His international results are amazing to behold and is just what breeders are looking in a showjumping stallion.  Within a year Varihoka du Temple catapulted himself into the top league with victories and placings in the top show-jumping competitions of Stuttgart, Oldenburg, Neumünster, Dortmund, Leipzig, Hamburg, Paderborn, Herning/DEN, Arnheim/NED, Kronenberg/NED and Zandhoven/BEL. Ridden by Patrick Stühlmeyer, he also successfully completed in the German Nations Cup team.

Performance - Varihoka du Temple was approved for breeding in France. He successfully started competing in 2015 in the international Youngster Tour. From 2016, he won international youngster competitions. He also achieved numerous placings, including a fifth place at the Munich Championships, a third place in the qualifier for the Grand Prix of Herning/DEN, a sixth place in the final of the Medium Tour in Münster and second place in Verden.

Sire - His sire is the Quidam de Revel son Luigi d’Amaury, who competed internationally. In addition to Varihoka du Temple, his son Ultrachic du Temple, who was successful in sport, was also licensed. His grandsire Quidam de Revel is a legend on his own; he has an impressive list of achievements and he himself participated in the Olympic Games in 1992, winning team bronze and finishing fourth individually under Hervé Godignon for France.  Ten off his offspring competed at the 2002 World Equestrian Games, including team gold medallist Dollar de la Pierre, who also won a team silver at the 2003 Europeans and finished 7th individually. He has produced more than 130 grand prix offspring,

Damline - His dam Narihoka d'Halong also produced the international show jumpers Rikann Sauvage (by Lando), Toulon Sauvage (by Toulon) and Sucre Blue Sauvage (by Mr. Blue). His damsire Kannan was the Olympic champion of 2012 and fourth of Rio 2016. He is highly valued through Voltaire, Nimmerdor and Le Mexico, was part of the French team under Michel Hécart in 2003 and 2004, which won the Samsung Super League. In 2005 he also won gold in the fight for the French championship. The list of the descendants of  Kannan is given by the London single Olympic champion and two-time World Cup final second Nino des Buissonnets / Steve Guerdat / SUI, the EM team third Quorida de Treho / Romain Duguet / SUI and the World Cup winner Albringen's Paille / Steve Guerdat from 2010 to 2017, which gave her father a place in the top ten in the WBFSH ranking of the world's best jumping sires. Kannan was ranked 16th in 2019, due to the other successful offspring, such as Quabri de I'Isle / Pedro Veniss / FRA and Oh D'Eole / Gregory Wathelet / BEL. The former PSI horse A Pikachu de Muze won the 2006 World Jumping Championships (6y), Bridget 2011 bronze at the Pan American Games.