National and Hanoverian Champion with three Tens at his grading. 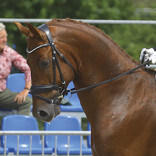 About - The jury apparently "had goosebumps" at the Bundeschampionat final appearance of Vitalos. Comments on the trot were that it was "...even and swinging through the body from the first step" for a 10! In the jump, "enormously uphill, with great shoulder action" again for a 10! In the walk a 9.0!

The contact is so precise, "you just can't better than this in a four-year-old horse", said his rider, also gaining a 10 for rideability! And the "typical, masculine physique" completes the overall picture very well – 9.0! With a total of 9.6, Vitalos won gold under his instructor Leonie Richter in the classification of four-year-old stallions, as before at the Hanover Championships in Verden. He completed his HLP in Denmark as the winner of his age group, where he also received the dream grade 10.

Sire - Vitalis was colt winner in the Netherlands in 2007, reserve winner of the NRW licensing in 2009, HLP dressage index winner in 2010, placed at the Dressage Horse World Championships and in the Pavo Cup final in 2012, champion in the USA in 2013 and qualified again for the Dressage Horse World Championships with a record number of points and in 2014 at the age of seven immediately victorious in the international Small Tour. Back in Germany in 2016, Vitalis won the Burg-Pokal final in Frankfurt and the Stallion of the Year competition at Inter I level at the World Cup in Ermelo/NED. Soon 70 of his sons were licensed. The first offspring are successful in Grand Prix dressage, such as the Louisdor Prize final runner-up Valencia AS and the Aachen winner and Otto Lörke Prize winner Valesco/both under Fabienne Müller-Lütkemeier, the Compiègne winner Vamos Amigos/Cathrine Dufour/DEN and the German U25 champion Vinay NRW/Ellen Richter.

Damline - The damsire, De Niro, himself already successful in the Grand Prix class at the age of eight and winner of the Hamburg Dressage Derby under riding master Dolf-Dietram Keller, led the WBFSH ranking of the best dressage sires worldwide for six years in a row. No championship where his descendants, including Desperados FRH/Kristina Bröring-Sprehe, Dablino/Anabel Balkenhol, D'Agostino FRH/Fabienne Müller-Lütkemeier, Delgado/Beatriz Ferrer-Salat/ESP, Voice/Edward Gal/NED and Deep Impact/Severo Jurado Lopez/ESP, Darco of De Niro ZS CH/Charlotte Lenherr/SUI, did not fight for medals.

More than 250 S-horses registered in Germany alone collected over 3.2 million euros in prize money for their father. With more than 100 licensed sons, the Hanoverian stallion of the year 2008 had a lasting influence on breeding.

Hanoverian tribe of the Aina, including the stallions Allegro (v. Augustinus xx) or Fabriano (v. Wendulan).