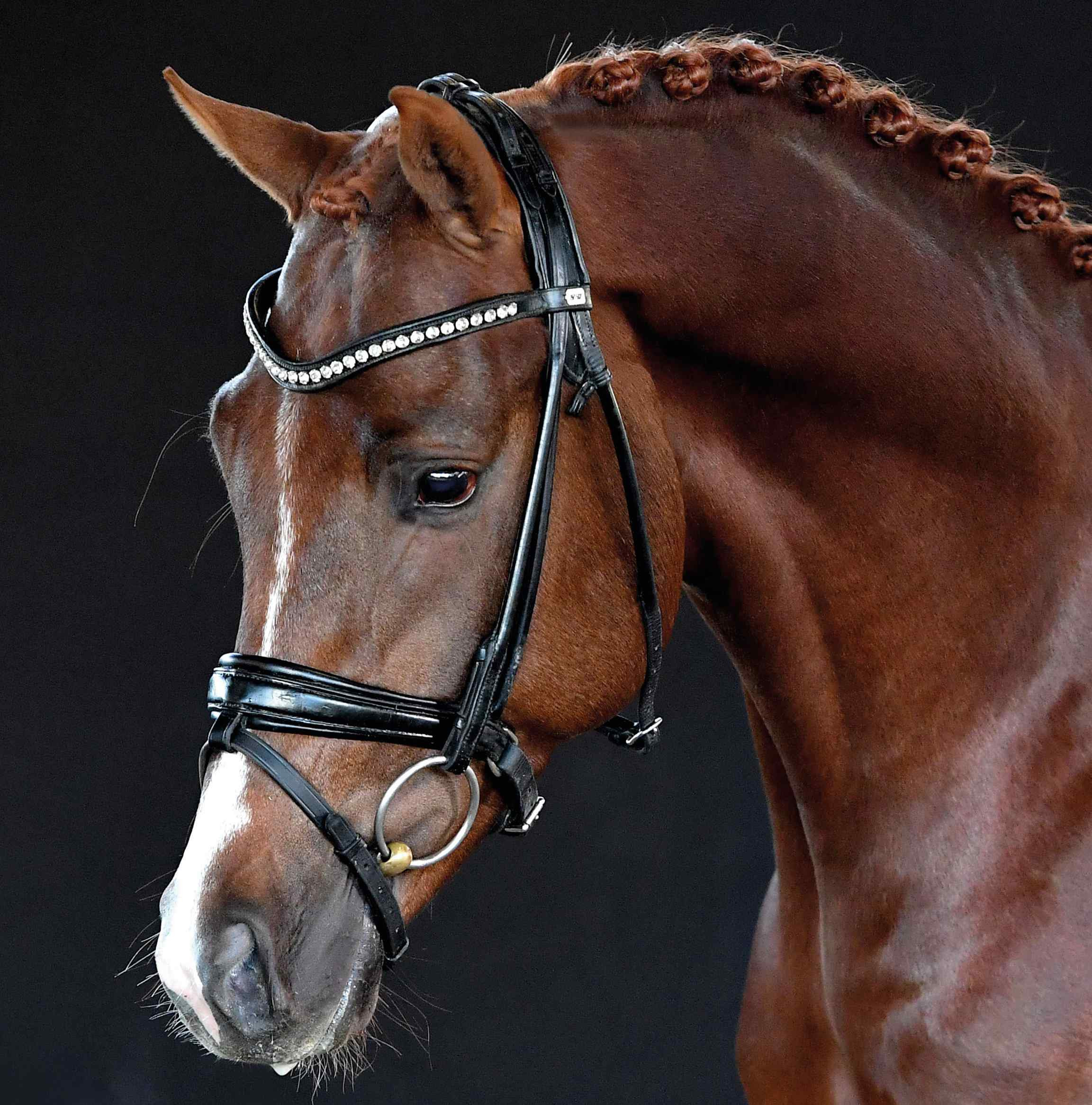 
Terms - €1200+VAT for unlimited attempts with chilled semen, for one named mare in one breeding season. If the mare is certified not in foal by the end of September,there will be a 50% credit applied for the following season.

PLEASE NOTE: This stud requires advance warning for health papers - if your vet requires original health papers to arrive with the semen, we will need at least two working days' notice. Please phone the office on 01837 880 100 to discuss. Elite Stallions cannot be held responsible in the event that the semen arrives without health papers and the vet will not inseminate.

About - Viva Gold is already the talk of the town in 2019, causing a stir with his first public appearance in Münster. "A future star from head to toe. Everything is just right at Viva Gold." He impresses with a modern, long-legged type, three outstanding basic gaits and an unbeatable damline. Viva Gold was the €140,000 top seller of the 2016 Summer Mixed Sales as a foal, on the same day that his grand-dam Weihegold OLD triumphed in the German Championships.

Sire - Vivaldi was proclaimed 'Preferent' by the KWPN in 2018, and is one of the most sought-after sires in modern breeding. His son Dream Boy, burst onto the international grand prix scene in 2018 with Hans Peter Minderhoud (who also competed Vivaldi), scoring +73% on his international debut before defeating a field of established horses to win the Olympia grand prix. He followed this up with victory in only his second grand prix freestyle in Mechelen on a score of over 83%. Blue Hors Veneziano, another Vivaldi son to impress in 2018, won the Louisdor Cup for developing grand prix horses in December, on a score of over 75%.

Vivaldi competed up to Inter I, scoring over 72% internationally at PSG. He was reserve champion of his stallion performance test and in 2007 he won the Pavo-Cup of five-year-old dressage horses. In 2008 and 2009, he added triumphs in the KNHS/KWPN stallion series achieving marks of 10.0 for his trot. Vivaldi is trained to advanced level. As a producer, he is now recognised globally; so far, in Germany alone 19 of his sons have now been licensed, amongst them several highly-priced premium stallions. Vivaldi enriched the World Championships of young dressage horses in Verden in 2014 and also in 2015, where his son Eye Catcher won the bronze medal of the six-year-olds. In 2015 and 2016, his son Fenix won the five and six-year-old Pavo-Cup in the Netherlands. The Pavo-Cup of six-year-olds was a real festival for Vivaldi in 2016, when behind Fenix, in second and third place, were First Apple and Fantastique, both Vivaldi progeny. Vivaldi's other sons include Desperado, Le Vivaldi, Geniaal, and Vitalis, who has dominated the German breeding scene in recent years.

Damline - Viva Gold's dam Weihronce is a daughter of none other than the fantastic Weihegold OLD, who is currently ranked world number one and is almost unbeaten under German ace Isabell Werth. Weihegold was team and individual gold medallist at the 2017 European Championships, won back-to-back World Cup Finals in 2017-2018, and was team gold and individual silver medallist at the 2016 Rio Olympics. She has broken the 90% barrier at grand prix level on five occasions, and in her 38 international grand prix appearances with Isabell, she has scored above 80% on 32 occasions. In her successful breeding career alongside her competing, she has produced two licensed sons in Sir Weibach and Total Hope, and her daughters have produced the licensed stallions For Gold and Dodo Weihgand, who was reserve champion of the 2018 Oldenburg licensing.

Damsire For Romance I is the epitome of a modern sire, and is from a Voltaire dam line that has been accorded great success. Blessed with three excellent gaits, his canter and trot can only be described with superlatives and his character is also noteworthy. He stood out brilliantly in the strong lot of stallions at the 2011 Oldenburg Verband licensing and the enthusiastic spectators in Vechta gave him standing ovations. Having been pronounced Champion Stallion of the licensing, For Romance did not disappoint during his 30-day test in Schlieckau, passing with super scores. He received a 9.25 for his trot and rideability, a 9.0 for his canter and an 8.88 for character. He won his first advanced level dressage classes as a seven-year-old and competed in the final of the Nurnberger Burg Pokal. In 2012, For Romance's full sister Fasine took the Oldenburg Champion Mare title - a brother and sister winning both these titles is a feat that is so far unique in the history of the Oldenburg Verband.

Third sire Don Schufro was a bronze medallist at the Olympics under Andreas Helgstrand, while fourth sire Sandro Hit is one of the most influential stallions of modern German dressage breeding. Countless top stallions are brought together in Viva Gold.