One of the most consistent stallions on the international circuit 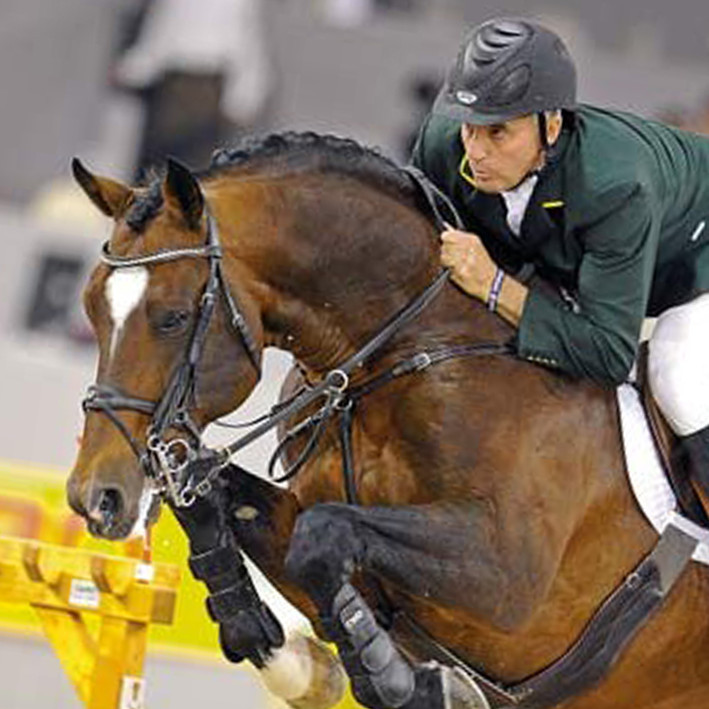 
Terms - All Schockemöhle stallions will be offered on a pregnancy basis only (no single doses available). €1200+VAT for unlimited attempts with frozen semen,  for one named mare in one breeding season.  If the mare is certified not in foal before the end of September then a 50% credit applies the following year to spend on any stallion from the same stud. If the first AI of the year is July 1st or later, the credit the following year is 100%.

About - Vivant van de Heffinck, competed as simply Vivant, has been one of the most consistent and reliable grand prix horses on the circuit over the past decade, competing at four senior championships with three different riders. He has always impressed with his robustness, character, manoeuverability, scope and great technique - he is supremely rideable and has an outstanding canter. At over 50% blood, he is an interesting stallion for jumping and eventing breeding alike.

Performance - He has won five World Cup qualifiers in Australia, and in 2010 took 7th place in the WOrld Cup Final, the same year he won the Munich Indoors Championship and was ranked fifth best jumping stallion in the world with Australian Chris Chugg. He was fourth in the Aachen Grand Prix, third in the Grand Prix of Bremen, and was winner of the Hagen Grand Prix. He was travelling reserve for the 2008 Olympics, and in 2012 he competed at the London Olympic Games for Ukraine under Katharina Offel. Cassio Rivetti took over the ride in 2013, and the pair have gone from strength to strength, picking up a host of wins, placings and team appearances at international level.

Sire - His sire Fuego du Prelet, a son of Jalisco, competed in the World Young Horse Championships in 1998 and 1999, and jumped at international Grand Prix by the age of 8. In addition to Vivant, he produced the 1.60m jumpers Rocco and Uno. Fuego is descended from a successful damline that has produced several good sport horses including the licensed stallions Veneur du Prelet, Fair Play III, Un Reve, and Belphegor IV, plus the 1.60m jumper Pomone B.

Damline - The damsire Landino also jumped at 1.60m, and the third sire Hedjaz is the damsire of both the Olympian Otterongo and Maclain Ward's Sapphire. Descended from the same damline is the international 1.60m jumping Urbanus, by Heartbreaker and a number of other horses jumping at 1.45m plus.

Progeny - In Australia, Vivant already has offspring jumping successfully at international 1.60m Grand Prix level, including Diamond B Vigo, Diamond B Vermont, CP Argento, Viduka, Diamond B Vixen, and Oaks Vivette. He also has offspring eventing, with Veretti competing at CIC3* level, having already won at CCI2* level in Australia. The offspring are blood in type, compact in the fram and have fantastic scope, with quick, keen temperaments.