A favourite at his licensing in 2019. 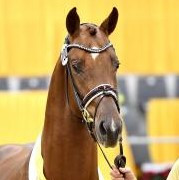 
Terms: €950+VAT for unlimited attempts with chilled or frozen semen for one named mare in one breeding season.  If the mare is certified not in foal before the end of September then you get a 50% credit the following year to use on any stallion from the same stud. If the first AI of the year was 1st July or later, then the credit in the event of non-pregnancy is 100%.

About & Performance - Von und Zu is a stallion who walks in the room and everyone notices, with his light yet bold paces he won the hearts of many in his licensing in 2019. He has a large amount of freedom in his movement and holds power in his hindlegs, he has a strong amount of regularity in his movement and he is a favourite for many this upcoming breeding season.

Sire - Vitalis was first reserve champion of the main NRW licensing in 2009, and dominated the dressage index of his stallion performance test in 2010 in Warendorf From the very beginning, he notched up wins and placings in dressage classes, including at the Dutch stallion championships and at the World Young Horse Championships. As a five-year-old, he was sold to American rider Charlotte Jorst, and was placed with her in the finals of the World Young Horse Championships as a six-year-old, having already dominated the US championship in his age-group. With record marks of 10.0 for trot and 9.8 for canter, he was clearly ahead of the other competitors. Since returning to Germany, he has been trained up to advanced level and is successful up to intermediate I. In 2016, he won both small tour classes at Ermelo on scores over 74% with Isabel Freese.

Damline - His damsire floriscount achieved numerous victories in 2010 and 2011 as well as placings in test for young dressage horses, and qualified repeatedly for the Bundeschampionat. Under Christoph Koschel he added his first placings in advanced level dressage classes at the age of only seven. In 2014, Oliver Oelrich continued his further training and collected victories and placings on international level. The pair won both PSG classes in Verden and in doing so qualified for the final of the Nürnberg Burg Trophy as well as the Inter I competition in Nieuw en Sint Joosland, where he placed second in the PSG and third in the freestyle competition. Further placings with the best followed in Hagen and Balve. Floriscount is now on the way up to grand prix with his owner's daughter, Patricia van Merveldt.