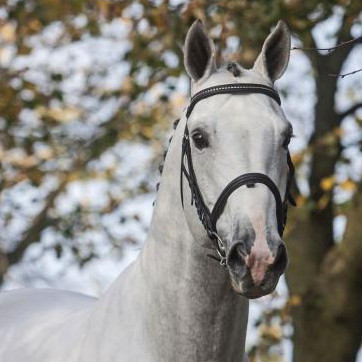 
Terms - €2000+VAT for unlimited attempts with chilled or frozen semen, for one named mare in one breeding season. If the mare is certified not in foal by the end of September, €1700+VAT will be refunded.

About - Zirocco Blue is a beautiful stallion with talent, scope, power and speed. He has been jumping at the very top level for a number of years, representing The Netherlands on numerous occasions. He has an outstanding canter, is extremely careful and bold, with excellent rideability. Zirocco Blue has now been retired to stud, which is great news for breeders.

Performance - Zirocco Blue has had an exceptional international career under Dutch ace Jur Vrieling. In 2015, he was part of the gold medal-winning team at the Aachen European Championships, finishing fifth individually, and the pair also competed at the 2016 Olympic Games. He was in the top ten of the 2015 World Cup Final in Las Vegas, has been on four winning Nations Cup teams, and won the Oslo World Cup Qualifier.

Sire - Mr. Blue has sired many hugely successful grand prix horses, including Simon, Sapphire B, and Plot Blue. Simon finished in the top 10 of the World Cup Final four times, including winning in Gothenburg in 2013, won the Spruce Meadows GP, and finished sixth individually at the 2011 European Championships under Beezie Madden. Sapphire B won the London Olympic World Cup qualifier and was third in the Gothenburg leg with Maikel van der Vleuten, amongst many other international wins and placings. Plot Blue has competed at five senior championships, two World Cup Finals, 23 GCT Grands Prix, and on the GCT Tour alone he has earned over €420,000 in prize money. In 2010 he won the Geneva World Cup Final, and in the same year led the Germans to team gold at the 2010 Kentucky World Equestrian Games.

Damline - Zirocco Blue’s damline is outstanding. His dam Licorne des Forets competed at international 1.50m level, and his grand dam, Gekas des Forets, not only competed at 1.40m level but was also a prolific winner as a young horse. Great-grand dam Rapsodie II also competed at 1.40m level. Licorne has produced two other licensed stallions, Ready Boy (by Quaprice Bois Margot) and Tibetin (by Corland), both competing internationally at 1.40m level, and a further seven offspring who are successful in sport. Gekas produced several sport horses, including grand prix jumper Nicos de la Cense, while fourth mother Mayflower produced six licensed sons, and her daughter Qualisca produced four sons, and every one was licensed, while five of her other daughters have produced at least one licensed stallion, in addition to numerous top sport horses.

Damsire Voltaire was a grand prix superstar and sire of more tha 25 grand prix stallions including Concorde, Vechta and Kannan, while thrid sire Le Tot de Semilly is a French foundation sire and produced, among others, the current top-ranked stallion Diamant de Semilly.

Progeny - Zirocco Blue has already produced the international grand prix mare Deep Blue Bride S, and the licensed stallion Durango VDL, who is jumping internationally at 1.50m level. He has more than 20 other licensed sons, including premium stallion Zornell and the two international jumpers Florian and Ever Blue. Zirocco Blue is well-suited to a blood-type mare, having crossed particularly well with Indoctro mares.