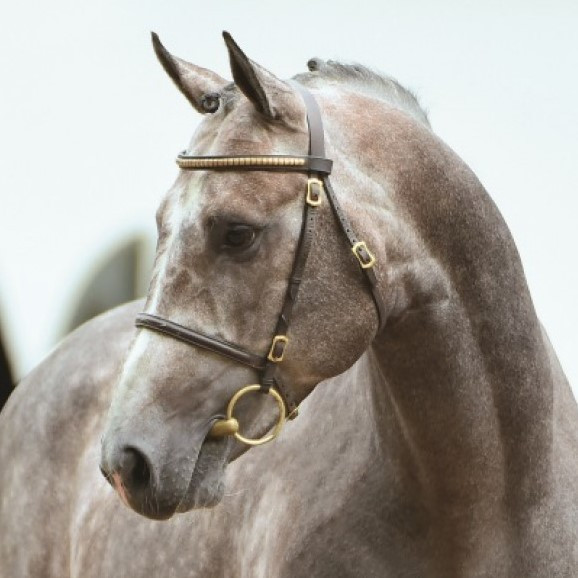 
Terms - €1250 +VAT for unlimited attempts with chilled semen on one named mare in one breeding season, if the mare is certified not in foal by the end of September €900 +VAT will be refunded.

About -  Zuccero performed spectacularly at his stallion grading, his walk under saddle is very regular and ground-covering. The canter is balanced and rhythmic, enabling the best jumping ability, he is an energetic and powerful performer. Zuccero’s free jumping clearly demonstrates the advancement of the Holsteiner breed. His carefulness and jumping technique are exemplary and unquestionable, an inheritance from great Cor de la Bryère, and his scope and powerful push-off are qualities passed on by his sire Zirocco Blue.

Performance - In 2017, the stallion could not be shown in competition due to a broken splint bone. Zuccero has been at Rolf-Göran Bengtsson’s yard since August 2018 and very successfully shown by Bart van der Maat. The combination has won five young horse jumping classes through M level and placed internationally. Past season saw Zuccero high place in several international jumping classes, for example in Neumünster, Opglabbeek and Lichtenvoorde. The past season Zuccero had been shown under the saddle of Rolf-Göran Bengtsson and has impressively demonstrated his quality jumping on the international scene. His 2020 achievements include numerous clear rounds and top finishes for example in Opglabbeek and Exloo.

Sire - Zirocco Blue has had an exceptional international career under Dutch ace Jur Vrieling. In 2015, he was part of the gold medal-winning team at the Aachen European Championships, finishing fifth individually, and the pair also competed at the 2016 Olympic Games. He was in the top ten of the 2015 World Cup Final in Las Vegas, has been on four winning Nations Cup teams, and won the Oslo World Cup Qualifier.

Damline - Zuccero’s dam, state premium mare Zarese, is by Caretino, a proven sport performer himself. He made the top 10 of the WBFSH world sire ranking several times due to offspring including Casall, Cristallo, and Chandra. Dam sire Caretino counts among the Holsteiner studbook’s top sires. Through Caletto II, another exceptional breeding stallion, the sire line traces back to once-in-a-century stallion Cor de la Bryère. He went on to win numerous young jumper classes showing his outstanding jumping technique. At 5 and at 6 years old, Caretino participated in the Bundeschampionate under Thomas Schöning. Bo Kristoffersen took over the ride on him a year later and commenced competing at Grand Prix and Nations Cup level. They accumulated 40 placings at S level together.