A national champion stallion who followed with a great international career. 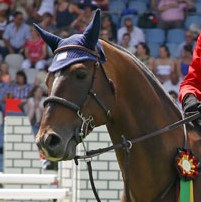 
Terms - €700+VAT for unlimited attempts with chilled semen, for one named mare in one breeding season. If the mare is certified not in foal by the 30th September, €400+VAT will be refunded.

Basket and Ordering will be available from February 14th Onwards

About - Lazio was National Champion as a 5-year old showjumper in 2005, followed by a successful international career. Lazio is not only a fantastic sports horse but also a great sire as in 2006, during a 2-year breeding debut in Hamstrup, Lazio sired 42 offspring with jumping placings. He passes on his limitless ability and great conformation, he is a stallion who has the titles and offspring proving his talents.

Sire -  Lancer won many ribbons in tests for young show jumpers and later in his career he went on to participate in the Bundeschampionat in Warendorf, he continued under Toni Hassmann in advanced level show jumping and the two of them won many tests or placed among the best.

Damline - His damsire Cor de la Bryere, name is found in the pedigrees of countless top sports horses, and he is a stallion that revolutionised modern breeding. By the Thoroughbred Rantzau, who was a successful racehorse before retiring to stud, Cor de la Bryère has over 100 licensed sons including Calypso, Cavalier Royale, Calando, Caletto, Corrado, and Cordalmé Z.