"A stallion with Grand Prix printed on his forehead" - Patrik Kittel 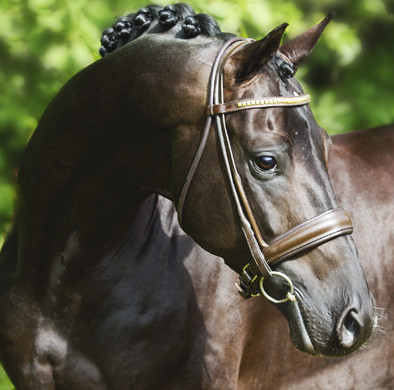 
Terms - €1000+VAT for unlimited attempts with frozen semen, on one named mare in one breeding season. If the mare is certified not in foal by the end of September, €650+VAT will be refunded.

About - Van Vivaldi is a very expressive and elegant stallion of modern type and has been rewarded for his very fine mechanics, balance, and ease of movement; an uphill stallion with three very good gaits.

Performance - Van Vivaldi was approved in Münster-Hahndorf 2012 as the first reserve stallion, and won the Swedish licensing for dressage stallions in 2014. He received the remarks active, clean and flexible with big reach for his walk. The trot is light, uphill, elastic with very good mechanics and self-carriage. The canter is very light, active, rhythmic, elastic with great self-carriage even on a long rein. In 2015, Van Vivaldi participated in the finals at the Scandinavian Open in Falsterbo, then finishing his competition year as the best Swedish horse in the World Championship for five-year-old dressage horses and he was awarded a maximum of 8.76 points.

In 2016 Van Vivaldi didn’t compete much because he was so highly sought after in the breeding. With his well-being in mind, he only competed three times. All victories with over 80%. Later that same year Van Vivaldi and Caroline Darcourt won Breeders Trophy for six-year-old horses with 86.4%. He received a word of praise from the judges, led by Mariette Sanders van Gansewinkel with remarks as; a fantastic horse with three very correct gaits. The walk has a good overreach, the trot has great suspension and covers a lot of ground, the canter is uphill and well balanced. In terms of future prospect, he received a score of 9.0. During 2018 Van Vivaldi has competed with great success in the small-tour, with many victories through Intermediere I, among them a double-victory during the meeting at Djurgårdens Ridklubb. In 2019, Van Vivaldi won on his Inter II debut with a score of 71,17%.

Sire - His sire Vivaldi was internationally successful with Hans Peter Minderhoud, and has 19 licensed sons in Germany. Vivaldi was himself Reserve Champion of his stallion performance test with 9.0 for walk and canter as well as 8.5 for trot, and won the five-year-old Pavo-Cup in Holland, won three stallion competitions in 2008, and in 2009 won the final of the KWPN stallion series, receiving a 10 for his trot. Both Vivaldi's sire Jazz and damsire Krack C competed at grand prix. Almost 100 Jazz offspring have reached grand prix, and he is currently ranked fifth on the WBFSH Sire Rankings, having led the rankings for four years (2008-2011) and having never been out of the top five since the current rankings began; a more successful record than any other stallion.

Damline - The dam Amuel is descended from four grand prix stallions in a row; Olivi, Biotop, Havidoff, and Vanitas. Olivi has produced mulitple grand prix horses including Unique, Unesco, One Night Stand, and Benzi Landro. Biotop was a top horse for the dressage master Reiner Klimke, and is responsible for several good small tour horses and licensed stallions, while Havidoff has produced the grand prix horses Micster Ed, Sauvage, Paganini, and Porto Rico, among others.

Offspring - Van Vivaldi can be used on many different types of mares with great advantage, especially to improve ease in both type and movement. In addition, he also gives his offspring uphill gaits active with self-carriage and charisma. The Swedish offspring have proven to be of a very appealing type, flexible with a natural ease of movements. Two offspring were taken to the elite foal auction in 2016. Van Vivaldi received his third approved son in January 2017. The three-year-old stallion was approved in Munich, where he later was sold at the following auction.

He has gained several more approved sons, they are of a good type and attractive with very good basic gaits. The results from both the 3-year test and the foal inspections in 2017 speak their clear language, Van Vivaldi is a type and gait sire of rank. The offspring in Germany are very successful even in the young horse classes. In Oldenburg’s championship for 3-year-old riding horses in Rastede July 2018, a Van Vivaldi offspring won. During the Bundeschampionat 2018, Venecia OLD (Van Vivaldi – Florencio I) became the Reserve Bundeschampion for 3-year-old mares and geldings.